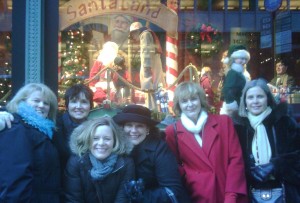 As I mentioned in an earlier post, happiness is my word for 2014. I’m generally an upbeat, optimistic person, so much so that I occasionally get on people’s nerves. Case in point. Recently my husband was moaning and groaning about taxes, and I remarked, “I remember once feeling the sting of property taxes right after Christmas, and when I told Mama about it, she wasn’t at all sympathetic.”

He had known and admired my mother so I had his attention.

I continued with my mother’s words, “Just be thankful you have the money to pay them, Darlin’.”

“Am I getting on your nerves with this type of thinking and talking?”

“Sort of,” he admitted. “It doesn’t make me feel any better if that’s what you mean.”

Still, I am what I am. According to Gretchen Rubin and the psychologists that she studied while writing The Happiness Project, a person’s innate temperament accounts for about 50 percent of her emotional set point. While I already knew that temperament, the raw material from which the personality is fashioned, is important, I liked being reminded of that little factoid.

#1. I like thinking of getting this characteristic from my mother. #2. It helps me to understand when some people are perpetually down in the dumps, gloom and doom prognosticators or dismal days ahead. They are what they are.

All that to say that like Rubin, although I am generally a happy person, I could be happier. I could work on that other 50 percent of my temperament that can change according to personal choices, effort, and environment.  We all can. Some people just choose not to. Like Rubin, I realized that nothing was going to change unless I made it happen. It’s yet another way of saying, “If it is to be, it’s up to me.”

There are dozens and dozens of suggestions in The Happiness Project, but today I’m zeroing in on a neat concept, emotional contagion. If you’re around people who are negative, pessimistic, or complaining, guess what happens? Right. You become more like them. Years ago, I came across a phrase that I’ve practiced ever since I saw it: sidestep negative energy. I don’t want to be infected by negativity, and have consequently tried to surround myself with positive people (note above photo). I want to be uplifted, not brought down.

Here’s the flip side to this emotional contagion concept. We all  have the power to affect other people’s moods. I think this is especially true for women, for it seems that they set the emotional tone of the home. “If Mama ain’t happy, ain’t nobody happy.” It’s true that the dad, brother, husband can send out negative vibes too, of course, but when he does, often people just stay out of his way.

I’ve made the choice to act upbeat and happy in the belief that my mood will affect the people around me. Rubin says she began singing in the morning and that her children liked that. She also began acting silly with them and found that her children and husband “caught” her mood. I haven’t started singing yet, but I have started listening to more music and humming along. And I’m working on the silly part.

Regardless of inner feelings, I’m making a concerted effort to act happier today. I’m going to put the emotional contagion concept to work and smile more. What’s something you can do to affect your environment, the one inside of your head and the one you live in?

One thought on “Emotional Contagion”