Why do women let it all hang out while men wear looser, longer, less revealing clothing? 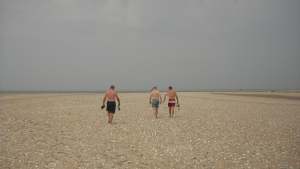 Last week when in Myrtle Beach, my husband and I saw a few young men walking around with their undies showing. They had on either jeans or shorts, but these articles of clothing were so low that even the casual observer could see the boxers.  Incidentally, these were color coordinated to complement the outerwear. Although it drives my husband CRAZY to see such attire, I’m sort of indifferent to it. Maybe it’s because I see it so often.

One day after listening to yet another comment on seeing someone’s boxers, I said something like, “Well, at least he’s covered up.”

“But it looks indecent! Underwear should be just that—underwear,” he replied.

“What’s so different about the hundreds of girls you’ve seen this morning? They looked like they were wearing their bras and panties, and you didn’t seem to mind that,” I said.

“Why? Because they’re girls?” I asked.

“No, because they’re wearing bathing suits. These guys are wearing clothes,” he said (a bit dramatically, I might add).

So that’s the question, Folks. Why is it that females (at least in my neck of the woods) can walk around in an extremely scantily clad fashion but men cannot? By the way, after our conversation, I began an earnest scientific (yeah, right) observation of beach attire, and during the two hours that I people watched, I saw two men wearing short and somewhat tight bathing trunks. The other men wore long, loose ones. Was I at the wrong beach on the wrong day?

Here’s what I think. In our society, women are still perceived as sex objects, and as such, they are much more likely than males to wear more revealing, form fitting clothes. We say, “Look at us!” Men say, “Here I am.” Why is that?

I’m not suggesting that you put your string bikini away. If you’ve got it flaunt it.  I’m just saying that men who show their underwear above their shorts are still more covered up and that their attire is much less suggestive. It looks kind of funny, but it doesn’t say, “Come hither.”

What’s your thinking on this? Why do women let it all hang out while men wear looser, longer, less revealing clothing?