What’s the right thing to do when you see a homeless person holding a sign asking for money or food? 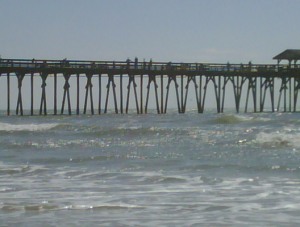 Myrtle Beach has a shadow side. I’m not talking about the vacationers who like to party hearty or the golfers who go a little crazy when they get away from home. I’m not even talking about the “gentleman’s clubs” or adult entertainment establishments in the area. I’m talking about the homeless people I’ve seen here on the coast. Maybe they aren’t actually homeless. Maybe they’re just down on their luck. Maybe I’m too quick to slap that homeless label on someone because he looks dirty and is holding a sign saying he needs money and food.

The other afternoon my husband and I were sitting at a busy intersection waiting for the light to change when I saw a handsome young man holding such a sign. His countenance was somber and sad, and his clothing was dark and stained, quite unlike the light colored, touristy attire of the people I’d seen all day. Fumbling quickly through my purse before the light changed, I found five dollars and beckoned him over.  When I saw his teeth, I knew my hunch was right.

“He’ll never make it before the light changes,” my husband said. “He’s going to get stuck in the middle of the road.”

I ignored the warning as the young man approached the car. I gave him the money and hoped he’d buy a burger and fries with it. He thanked me and then disappeared between the lines of vehicles.

“How do you know he’ll buy food with that? Look, he’s already leaving his spot beside the road.” Otis commented.

“So? Maybe he’s going to get some food. And if not, then so be it. You can’t give someone something and then dictate what he does with it.”

The topic has come up a few times during the last few days. I’ve heard people say they’d gladly buy someone a burger or chicken combo but they’d never give them money. Why? Because the person might buy booze or drugs with it. But what if the person wants a pizza or a couple of tacos instead? Does your generosity apply only if you and only you get to decide on what the disadvantaged person eats?

I took one look at that sad young man and knew it wasn’t for me to judge him or his state of neediness. He could have been my sweet boy…or yours. And you know, it was only five bucks! We’d just paid twice that amount for each of us at Abuelo’s.

So I’m interested in your opinions. Should you give money with stipulations, or should you only give food? To take it a step farther, should there be strings attached to monetary gifts?

2 thoughts on “To Give or Not to Give”