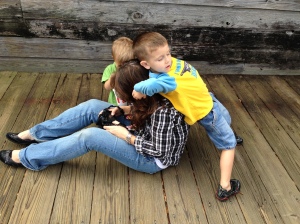 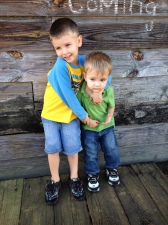 We were sitting in the Trestle enjoying lunch when my husband called. Although I rarely take calls while in the company of others, especially during a meal, I decided to answer this one. I figured it must have been important since I’d already talked to him once that day.

“Hey! I see you’re already on the way home.”

“No, I’m in Conway having lunch with Carrie and the California crowd,” I said as I smiled at Emma who was devouring her chicken strips with great gusto.

“Oh.” And then after a pause, “Well, are you leaving from there?”

“No, I actually have to go back to the beach before I leave.”

“That’s crazy! Why are you doing that?”

“Because there are 11 of us, and we couldn’t all fit in one car.  I’m a driver today and have been pointing out some of the sights of the area to Rich’s mom and sisters.”

“Well, when are you leaving Conway? Right after lunch?”

I was beginning to get un poco annoyed. It was hard to explain the desire/need  to spend every possible moment with the people around the table to someone who lives within a 30 mile radius of everyone he loves.  “Uh, well, we’re doing the whole River Walk thing first.”

Silence. Then, “Let me know when you leave.”

I promised to be home by dark and hung up the phone just as Brook asked if I’d share my sour dough bread with her. The Trestle in Conway has the best sour dough bread in SC, and Brooke, my 8-year-old granddaughter, apparently felt the same way.

We laughed and talked and had several photo ops. I bought a huge piece of chocolate pound cake to share with everyone, but my plans came to naught since 4-year-old Colton apparently thought I had bought it especially for him. After getting impatient with sharing the fork, he dug into it with his tiny fingers and pushed a savory bite into his mouth.

When we got down to the last bite, I offered to split it and share it with him. Keep in mind that I had only enjoyed two measly bites.

Bills paid and tips left, we took off for a stroll along the River Walk, and what a great time was had by all.  With temperatures in the low 70’s and the sun shining down through the majestic trees, the weather was beautiful. Old Man River just kept on gliding along, and we felt ourselves relaxing to its rhythms. Boats and at least one kayak slid by on the calm surface of the Waccamaw, and dozens of people sat on benches or sauntered along taking in the beauty of the scene. It didn’t take much imagination to think that this could have been an October afternoon in 1713 instead of 2013.

While the need to head for home and responsibilities nagged at my consciousness, I refused to succumb to “duty demands” and was determined to relish every moment of the afternoon. The children picked flowers for Aunt Heidi’s hair, and she was a good sport about it. Later I noticed three of the little ones surrounding Heather on a bench overlooking the Waccamaw. They were caught up in conversation with her, and I loved seeing the interaction between them. Glancing at the scene, I noticed for the first time just how much Brooke looked like her aunts, her father’s twin sisters.

There are many scenes tucked away in my memory bank from that special afternoon, too many to recount. Still, I’m listing one from each of the people I shared the hours with.

It was an awesome afternoon with lots of laughter and special moments. Maybe someone else who was there beside the Waccamaw that day will chime in with a memory. Or maybe someone out there in Cyberspace will share a memory of a time when he or she snatched a few hours from the daily round to make some memories.