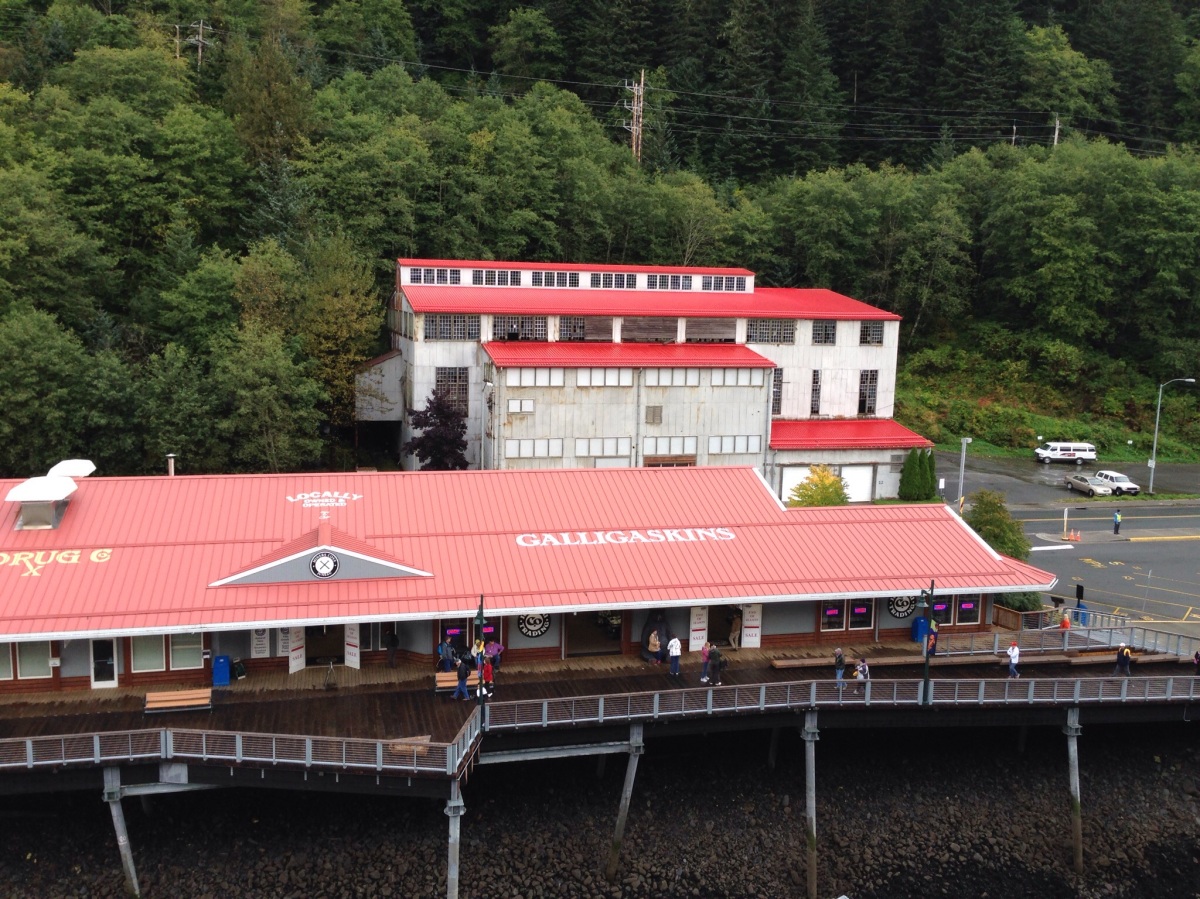 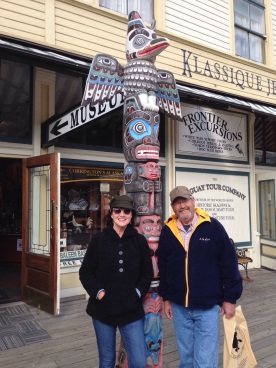 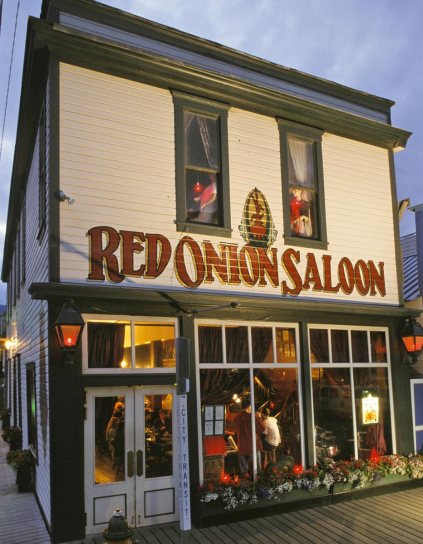 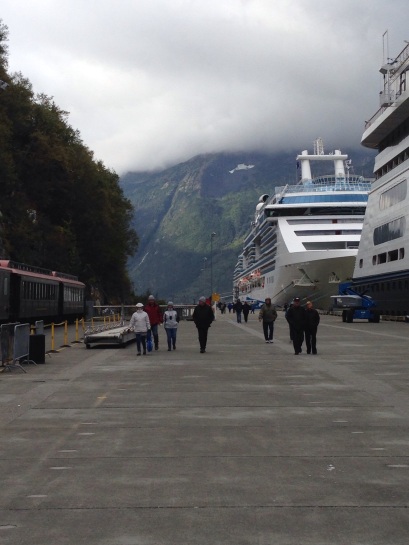 Somewhere there’s a small picturesque town in Alaska called Skagway where six of us, all South Carolinians, spent a few memorable hours. We knew it was going to be a fun day as we stood waiting on the deck. As we studied the mysterious graffiti on a huge rock across the way and then glanced at the town villages to our left, we practically bristled with excitement and impatience.

Finally the disembarkment began, and beneath an overcast sky, we walked down the gangplank and strode toward the town. A small shuttle bus took several  passengers to the downtown area, but most of us chose to take the coastal trail so that we could get a better look at the ships in the harbor and some of the local scenery.

Six of us began the excursion together, but the cold and wind began to aggravate Judy’s oncoming cold, so she and her husband Carl left shortly after arrival. My friend Jeanita and I enjoyed browsing through the shops along Main Street, including a fur shop where she spied a coat like one she had purchased years ago. The town (at least the area where we were) was neat, clean, and pretty. Businesses were all well-maintained, and it was a pleasure to walk up and down the main drag and a few blocks off to the side where the homes were.

“Can you imagine living in a place like this?” I asked Jeanita.

“No. I mean, look at those mountains. How would it be to walk out your front door and see them on every side?”

“I know, I know. And then right around the corner, there’s the water,” I said, walking into yet another store.

“But oh my gosh, it’d be so cold,” Jeanita said. “It’s only September, and we wouldn’t be able to stand the wind without our vests.”

There were jewelry stores, souvenir shops, and even a museum. Attracted by its façade, we went into the museum/gift shop. Dark and a little musty, it was unique in size and interesting. It was probably the smallest museum I’ve ever visited, and yet it contained a treasure trove of artifacts and gold rush memorabilia. We browsed through the building and left with jade bracelets and matching earrings. We’ve never been able to pass up a deal, and the jade combo was no exception—buy the bracelet and get the earrings free.

We sauntered into a bakery and vowed to come back for muffins. We didn’t. Not really a regret. Just a fact. You can’t do everything and eat everything. Time and the human digestive system won’t allow it. We went into several jewelry and souvenir shops. Although the businesses were technically souvenir shops, they had a different feel about them, especially the one with native art and jewelry.

Our husbands had walked apart from us most of the day, laughing and talking about who knows what. Near lunchtime, the four of rendezvoused at the Red Onion Saloon. In its heyday, the business operated as one of the finest dance halls and saloons in the gold rush town of Skagway. It was also a bordello, and today visitors can tour the rooms upstairs for a small fee.

Diners from the various cruise ships filled the tables, and we four sat near the front, a location affording good views of the outside street action and of the restaurant goings-on. The servers all wore dresses with low-cut, form-fitting bodices. In keeping with the spirit of the bordello past, the girls had money stuffed in the front of their dresses. We enjoyed the upbeat ambience of the place and agreed that our chowder and chili dishes were quite tasty.

We talked to our server, and when Thomas, Jeanita’s husband, asked her what she was going to do when the ships left, she simply said, “Relax.” She then turned to us and said that actually she was somewhat of an artist and that she made Christmas ornaments of twigs. When she described the ornaments in detail, I recalled seeing them in a gift shop for the price of $44. Artistic or not, the tiny twig tree was too pricey for me.

Reluctant to leave a place with so much charm and beauty, we stopped by the souvenir shop on the way out. Purchases in hand, we rounded the curve leaving town and walked briskly back to the ship in the chilly, damp air.