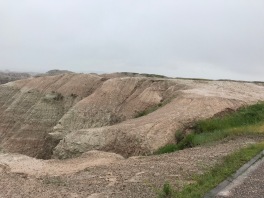 What does “Badlands” really mean? I wondered, never dreaming that one day I’d actually be visiting this surreal, yet lovely, place of amazing rock formations, towering spires, and steep canyons.. In photographs, the landscape appeared desolate and haunting. How would it be in “real life?”

Two and a half weeks ago, I had the opportunity to experience the “mako sica’ or “land bad” for myself. The Lakota people were the first to call the Badlands “mako sica,” and apparently the lack of water, extremes in temperature, and exposed rugged terrain all contributed to this name.

But first, a little history. We arrived in Rapid City, SD on Father’s Day and rented a car for the next day. Although we were joining a tour with Gate1 on Monday evening, we wanted some free time to explore the Badlands before officially beginning the National Parks Tour. Rapid City, also known as the City of Presidents, is an interesting city with lots of history. To my untrained eyes, its look is both old and new, a city intent on preserving its Native American history while continuing to update and move forward. There’s a strong military presence there, and tourism is a major economic factor.

Deciding to eat breakfast along the way to Badlands National Park Monday morning, we took the scenic route and discovered there were no Mickey Dee’s or Bojangles along the way. Pretty scenery though. We saw hundreds of huge bales of hay and just as many cows.

After about an hour, we arrived at the Park and stopped at the Cedar Pass Lodge for a delicious breakfast—sans grits. The restaurant was attached to a gift shop filled with interesting items. As an aside, I saw a pair of earrings priced at $10, and no lie, I saw the same ones several other times during our trip priced at 5 and even 10 dollars more. 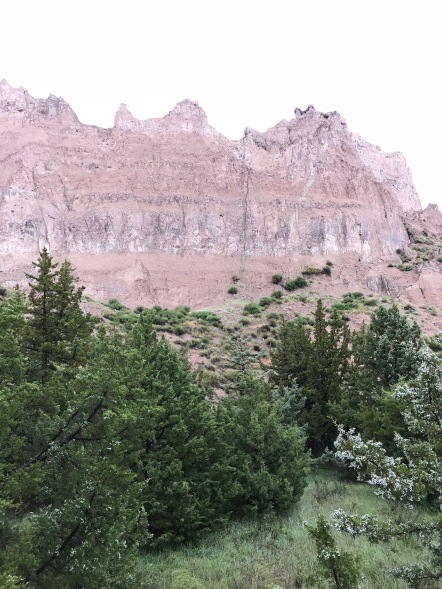 The Ben Reifel Welcome Center is next door to the diner, and we couldn’t pass that up. Once inside, we were treated to a museum-like experience that was quite educational. I  learned a new word: mosasaur. Related to the modern Komodo dragon, it’s a giant marine lizard. I learned that the Badlands is rich with fossils and that new ones often emerge after a heavy rain. It was raining that day………

We drove the loop road and stopped at two trails and four overlooks. The Notch Trail was the first one on the loop, and I joined several other crazy people who, despite the rain, were also determined to walk in such awesomeness. I next walked part of the Window Trail but turned back at the end of the boardwalk because of the rain and thick mud. The rangers had warned us of serious slipping and sliding, and seeing people who had braved the mud struggling to maintain their balance convinced me to retrace my steps.

Once back in the car, we continued the Loop Road, oohing and ahing our way along the geologic wonderland. Scenic with its ridges and towers and colors, every few feet brought yet another exclamation of awe. I might add that it was rainy, cool, and overcast, so there were no shadows cast by the sun. While some might find that boring, I loved it. I agree with John Madson’s assessment that “It’s an improbable looking place, looking like the set on a science fiction movie.” Although the land in the Park appeared mostly barren, there were also grasslands that are home to a variety of wildlife. We saw mule deer, big horn sheep, and several goats.

Knowing that we’d likely never pass that way again, we stopped at four overlooks to gape and gawk at the splendor before us. A stranger volunteered to take a photo of us, and though wet and bedraggled, we agreed.

Our day at the Badlands National Park was Amazing with a capital A. I like the way John Fremont put it in his diary in 1842: “I had never seen anything which impressed so strongly on my mind a feeling of desolation….The wind was high and bleak; the barren, arid country seemed as if it had been swept by fires, and in every direction the same dull ash colored hue derived from the formation me the eye….”