Without going into the whole tabula rasa thing, I’m simply going to share something I heard on a podcast a few weeks ago. It wasn’t anything I didn’t already know because I did. But what arrested my attention and kept me listening were these words by the presenter: You know what you know because you’ve been told that by someone.

That someone might have been a parent or a teacher or a friend. Still, until you heard those words, you didn’t know that fact, i.e., the earth is round. As you matured and began to read, words from a book told you things you didn’t know before. Before long, you realized you were part of a culture, and although you knew there were different cultures and peoples and traditions and languages in the world, yours was the most awesome. Maybe you were a bit ethnocentric. I was. Probably still am.

As a child, I learned to speak English. In my baby book, my mother wrote, “Jane now says so many new words each day that I can’t write them all down.” I’m confident that the words were dog (not chien), brother (not frere), and house (not casa). My parents and extended family spoke only English, not French or Spanish, so that’s what I learned. A simple example, and yet you get the point. Language is a huge and unifying part of one’s culture.

We went to a Baptist church where I was taught that “Jesus loves the little children, all the little children of the world.” My young friends and I sang those words with fervor, and yet none of us really knew any other children except the ones who were just like us. Until I went to college, I didn’t have classes with any Black or Asian Americans.

In grades 1-12, my friends and siblings learned quite a lot about the traditions and history of our country. George Washington was our first president and a brilliant military leader; Thomas Jefferson was a great statesman, the third president, and primary author of the constitution; Native Americans (called Indians back in the day) were savages who lay in wait to attack Europeans as they tried to “make it” in this land.

I’m not saying the above statements are bogus. I’m saying the truth is somewhere in the middle.

Washington was indeed America’s first president, Commander-in-Chief of the colonial forces, and slave owner of about 300 slaves (give or take). Jefferson once called slavery an Assemblage of Horrors, yet he owned around 175 servants. And then there’s Sally Hemings. Native Americans lived here long before the Europeans arrived, but now ….

I bought it all—hook, line, and sinker and was an adult before I realized how complicated things were. My awakening was slow. First, it was Dr. Martin Luther King, Jr. His “I Have a Dream” speech can still move me to tears. Then I read Bury My Heart at Wounded Knee. The world was changing, and while I saw that as a good thing, it was a little discomforting. I read Ramona and learned more about the treatment of Mexicans and Natives, visited Juneau and stumbled upon “The Empty Chair” Memorial, toured Mount Rushmore and began to understand why the Native Americans were a bit bothered by the faces of white men carved into what they (the Natives) viewed as a sacred mountain. During the last several years, we’ve been fortunate enough to travel to many Plains states, and some of things I saw and heard and read will disturb me for the rest of my life.

One night I watched an interview with Susan Sarandon and Jimmy Fallon in which she said, quite calmly and assuredly, that America was founded on the “genocide of Native Americans and on the backs of slaves.” I gulped. In that moment, I knew she was right and that she had known this truth for a long, long time.

I just started reading Born a Crime by Trevor Noah. It’s funny and clever and smart (like he is). At the end of the introduction to apartheid, he says: “….but the general thrust of it should be easy enough for any American to understand. In America you had he forced removal of the native onto reservations coupled with slavery followed by segregation. Imagine all three of these things happening to the same group of people at the same time. That was apartheid.”

I’m not dissing my teachers, preachers, parents, friends, books, or television for the things I blithely accepted as fact. I’m saying that being open to learning the “also truths” has been eye opening. It’s complicated. 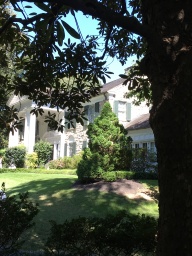 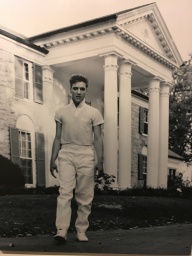 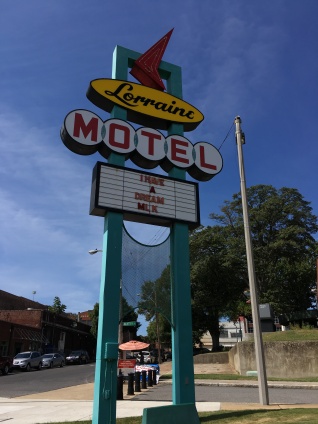 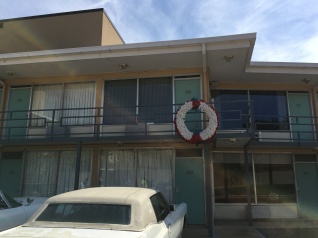 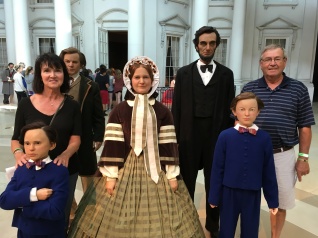 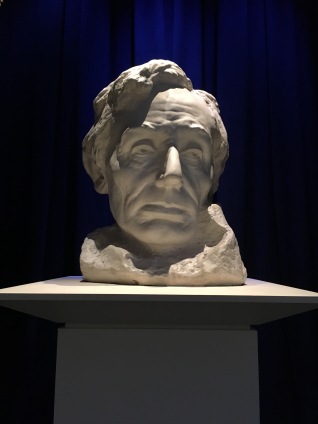 Ever since our trip to Illinois last week, I’ve been thinking of three men who made an indelible mark on our country: Elvis Presley, Martin Luther King Jr., and Abraham Lincoln. While traveling, we visited sites that filled our minds with facts and an increased sense of appreciation for their gifts and perseverance.

We arrived in Tupelo, MS just minutes after the museum chronicling events in Elvis’ life closed. No problem. The grounds were lovely, and we were able to take as much time as we wanted to see the small two-room house where he was born, the church where he spent many Sundays as a child, a huge statue of Elvis as a teenager, and a brick inlaid time line of major life events. It was all fascinating, but I think what captured my attention and awe was just how humble Elvis’ beginnings were.

Elvis’ music touched people all over the world. From the Graceland tour in Memphis, I learned that his Hawaii concert was viewed by one and a half billion people in forty countries. So no, he didn’t fight for human rights or lead a country divided by war, but his impact on others remains. I’ll always remember, “Another little baby boy was born in the ghetto, and his mother cried.” Powerful song.

While I got a real sense of Elvis’s personality and heart while in Graceland, I felt more sad than glad there. He worked hard, played hard, loved hard, and died far too young—right there in Graceland.

While in Memphis, we visited the Civil Rights Museum, an awe-inspiring collection of photographs, artifacts, movies, news clips, and dioramas that teach and inspire at the same time. The main part of the collection takes part in the Lorraine Motel, the place where Martin Luther King Jr. was felled by a single bullet. There’s a wreath on the railing where he was shot. Inside, the rooms where he and some companions stayed are preserved as they were on that day in April 1968. He was an extraordinary man on a mission to improve life for African Americans and all people who were marginalized.

I know he was no saint. But still, when I ponder his role in the Civil Rights Movement and remember King’s “I Have a Dream” speech, I can think of no one who did more to move equal rights for all forward.

And finally, there’s Abraham Lincoln, the 16th President of the United States. As all school children know, Honest Abe, also known as the Great Emancipator, spent much of his young life in a log cabin in Kentucky. He mother died when he was nine years old, and his father remarried about a year later. He was basically a self-taught man whose education is estimated to be a total of eighteen months. He worked at a variety of occupations, including rail-splitter and shopkeeper, before entering political life when he was elected to the Illinois state legislature in 1834.

In Springfield, the facts from history books came to life as we toured Lincoln’s home, ambled through his community, visited the Lincoln Museum, and walked through the old Capitol. In the museum, I learned more of his angst about the war, the slavery issue, and the nation’s economy. I began to see him as a “real” figure, one who loved his country, his wife, and his four boys. Three of the four sons died before reaching adulthood.

Assassinated by John Wilkes Booth, Lincoln also died too young. He rose above all manner of issues to become one of the most popular and respected leaders of the 19th century.

Elvis and Abe came from lowly beginnings; one became a performer who charmed and entertained people all over the globe, and the other became grew up to hold the highest office in the land. Although his family wasn’t poor, MLK had his challenges and struggles too. Regardless of their inauspicious beginnings, all three men seemed destined for greatness.

Seeing evidences of their lives up close and personal makes me ponder for the hundredth time (or more): What makes some people rise above obstacles to fulfill their potential and become instruments of progress, fairness, civility, and yes, entertainment while others do not?