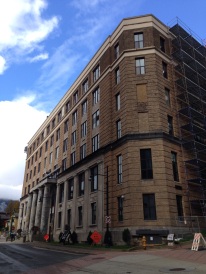 By this point in our trip to Alaska, I realized that many of our co-travelers were going on expensive excursions and seeing things we were missing out on. We considered signing up for the Best of Juneau excursion that offered at least three fun experiences, but we were too stingy to spend an extra $400+ dollars. Besides, there were things I wanted to do in Juneau that didn’t involve salmon or whales.

The day in Juneau began pretty much like the Skagway morning had. We hustled down the gangway like kids let out of school. When we reached the main drag, there was jewelry store after jewelry store, all of them proclaiming to have the most beautiful and reasonably priced gems, gold, and silver. Since ours was the last tour for the season, their prices had been reduced.

Already having more jewelry than I could wear, I sauntered in and out of a few shops to browse for souvenirs for the girls on my list. Most businesses were giving away a free gift, and I ended up with two charms, a turquoise bear and an onyx whale’s tale. We bought Northern lights pendants and earrings for the daughters, daughters-in-law, and granddaughters on our list.

Except for Otis and me, the rest of our party went back to the ship. Determined to explore the city, I set out for a walking tour while my husband hung around the harbor checking out the sights and sounds. After telling him exactly where I’d be going and when I’d return, I took off up the hill to the left. A few blocks later, I came across the State Office Building and the Alaska State Museum, both of which were closed.

Disappointed but undeterred, I continued climbing until I spotted the Governor’s Mansion, a big white Southern Plantation-looking house. The juxtaposition of the colorful totem on the side of the white mansion was, well, interesting. Another noteworthy detail was how close the mansion was to the street. There were no barriers between Sarah Palin’s former residence and her neighbors. What was to prevent people like me, curious tourists, from coming onto the lawn for a photo op? The yard, incidentally, was average, kind of on the small side. The governor’s family could stand on the front porch and have a conversation with the neighbors!

Leaving the Governor’s neighborhood, I walked over a few blocks for a glimpse of several churches, including a Russian Orthodox Church, St. Nicholas, that I’d read about in a brochure. I then climbed what seemed like 150 steps of an outside staircase until I arrived at the Wickersham House, the home of a well-known judge who, among other things, was instrumental in the creation of Denali National Park. 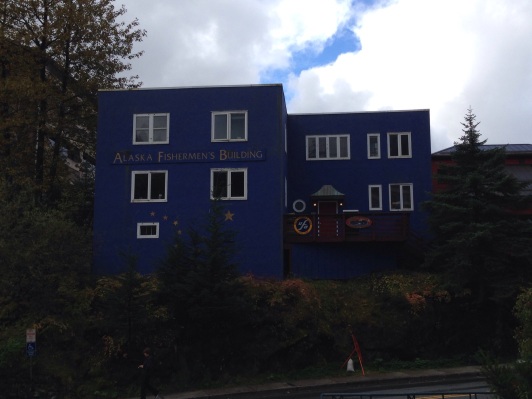 On the way back down to the main thoroughfare, I saw an arresting site, a single chair placed on what appeared to be wooden planks. A closer look revealed a plaque entitled The Empty Chair, and a little research revealed its significance. In 1942, the United States forced many Japanese people into internment camps, one of whom was a young man named John Tanaka. Valedictorian of Juneau High School that year, he didn’t get to graduate with his class. A bronze replica of the folding chair like the one Tanaka was unable to occupy at graduation was later placed on this Juneau hill to represent this young man and 50+ others who were sent to interment camps.

Sobered by the history lesson, I turned and began the descent into the busy shopping area. From atop the hill, I could see water, ships in the harbor, and a bustling downtown. The hilltop seemed the perfect spot to honor those interned in camps so many decades prior.

Before leaving Juneau, we bought some hot chocolate from a kiosk and sat sipping and watching the tourists and townspeople walking briskly by us. Reluctant to leave, we finally rose and ambled into the Alaska Fudge Company for a tiny wedge of fudge. On the way out (just couldn’t see to tear ourselves away) we walked into a specialty shop, one that claimed to have unique Alaskan wares, and I left with a small Nativity scene with Baby Jesus and his parents in Eskimo garb.

That night at dinner we compared notes of our day over yet another delicious meal, this one including raspberry sorbet served to cleanse our palates and an extra plate of pistachio cookies—just because.