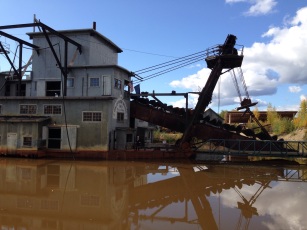 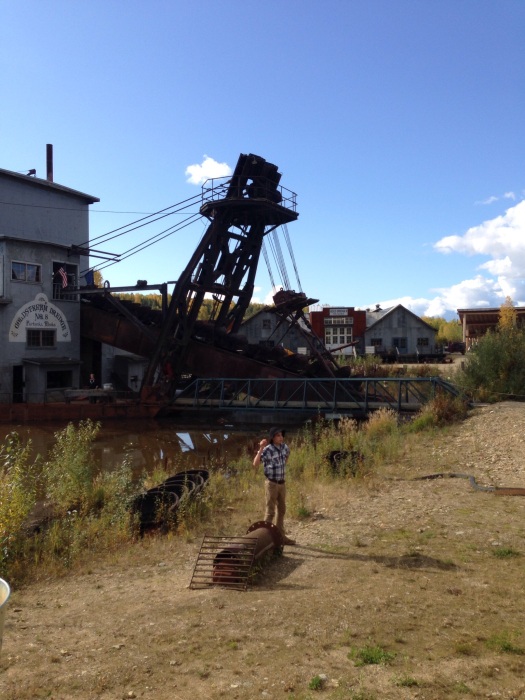 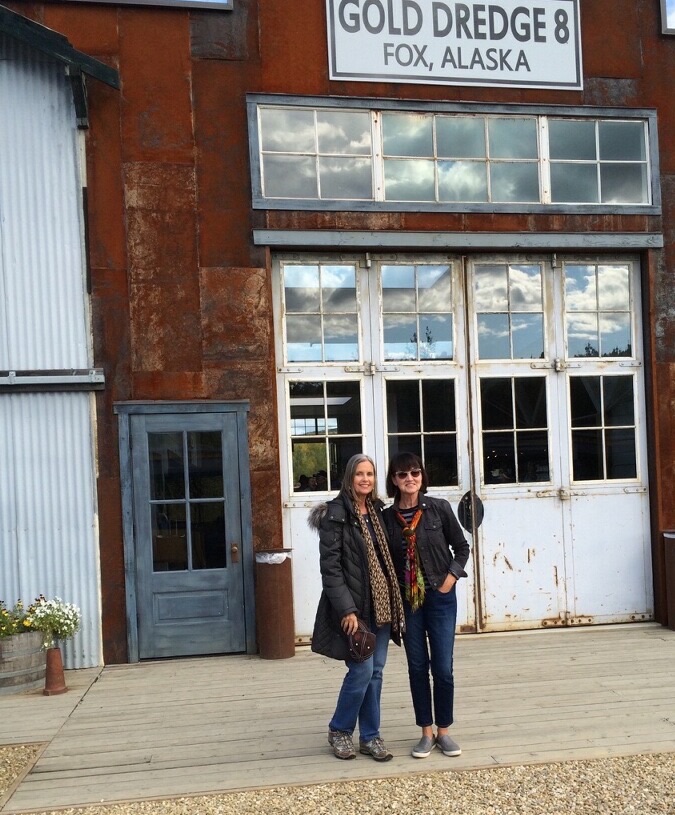 I’m wearing my gold-filled pendant on its delicate silver chain today. Yes, you read correctly—gold-filled pendant. There are flecks, not nuggets, in the tiny round pendant, but still, the jewelry is special because of the memories it conjures up, memories of a cool, overcast afternoon in the 49th state.

We’d spent the morning on the Chena River, and lunch behind us, we clambered aboard the tour bus to head towards our next excursion. Before the afternoon ended, we’d have walked beneath the Alaska Pipeline, also referred to as TAPS (Trans Alaska Pipeline System), and panned for gold. The girls would be taking home some gold-filled treasures. When I say “girls,” I’m referring to pretty much every female on the excursion.

As soon as we disembarked and headed towards the Pipeline, we could see that the people already assembled were paying rapt attention to the speaker. Dressed in black from his hat to his boots, the presenter shared a number of facts with his listeners, including the tidbit that the Pipeline provides revenue to help operate schools and that Alaska citizens receive a check from its profits each year. Designed to move oil from Alaska’s north slope to Valdez, the 800-mile Pipeline is a marvel of construction.

Next we got on an open-sided train that was a replica of the Tanana Valley Railroad. While we waited for the train to get going, a musician entertained us by playing the guitar and playing “Ring of Fire.” Within a few moments, the train rolled down the tracks to Gold Dredge 8, a popular and historical attraction, where we learned how the dredge worked the gold fields. According to the literature, Gold Dredge 8 extracted millions of ounces of gold from the frozen Alaskan ground and today serves as a monument to the miners who built Fairbanks.

After a presentation on the history of Gold Dredge 8, we piled off the train and were handed small bags of what appeared to be dirt. Little did we know there would be actually smithereens of gold hidden in the dirt. Friendly employees clad in plaid shirts gave the gold diggers (us) a demonstration of exactly how to pan for gold by using the warm water in the troughs in front of us. After striking it rich, we deposited our tiny nuggets into a plastic receptacle and headed to the huge rustic building close by.

The building contained a number of gift shops and a jewelry kiosk (?) set up to measure our gold. Delighted to learn that we had enough specks to preserve in a pendant, most of the women walked over to one of the gift shops to check out our options. Choices included pendants and earrings of various sizes and designs. I chose a “plain Jane” version, but my traveling buddies got something a little more embellished.

While wandering in and out of the various shops, most people sipped on complimentary hot chocolate, coffee, or water as they munched on delicious freshly baked cookies. My personal favorite was chocolate oatmeal raisin.

Fortified by our snacks, we boarded the railway car and listened to a gentleman play the fiddle and sing “You Are My Sunshine.” Many of us joined in the singing, and I knew that I’d always recall that beautiful afternoon just “a singing” beside Gold Dredge 8. Seeing the staff lined up with smiles and goodbye waves added the perfect ending to the afternoon.

Back at the lodge, eight of us later met for salmon chowder, cheeseburgers, and meatloaf. To be honest, the food was mediocre to be so expensive. My chowder was thick, muddy, and lukewarm (even after it was reheated). My husband still talks about his $4.50 scoop of chocolate ice cream and is planning a trip to Cold Stone Creamery in Myrtle Beach ASAP.

Everyone hit the sack early that night, excited with the knowledge that we’d be heading to Denali the next morning.