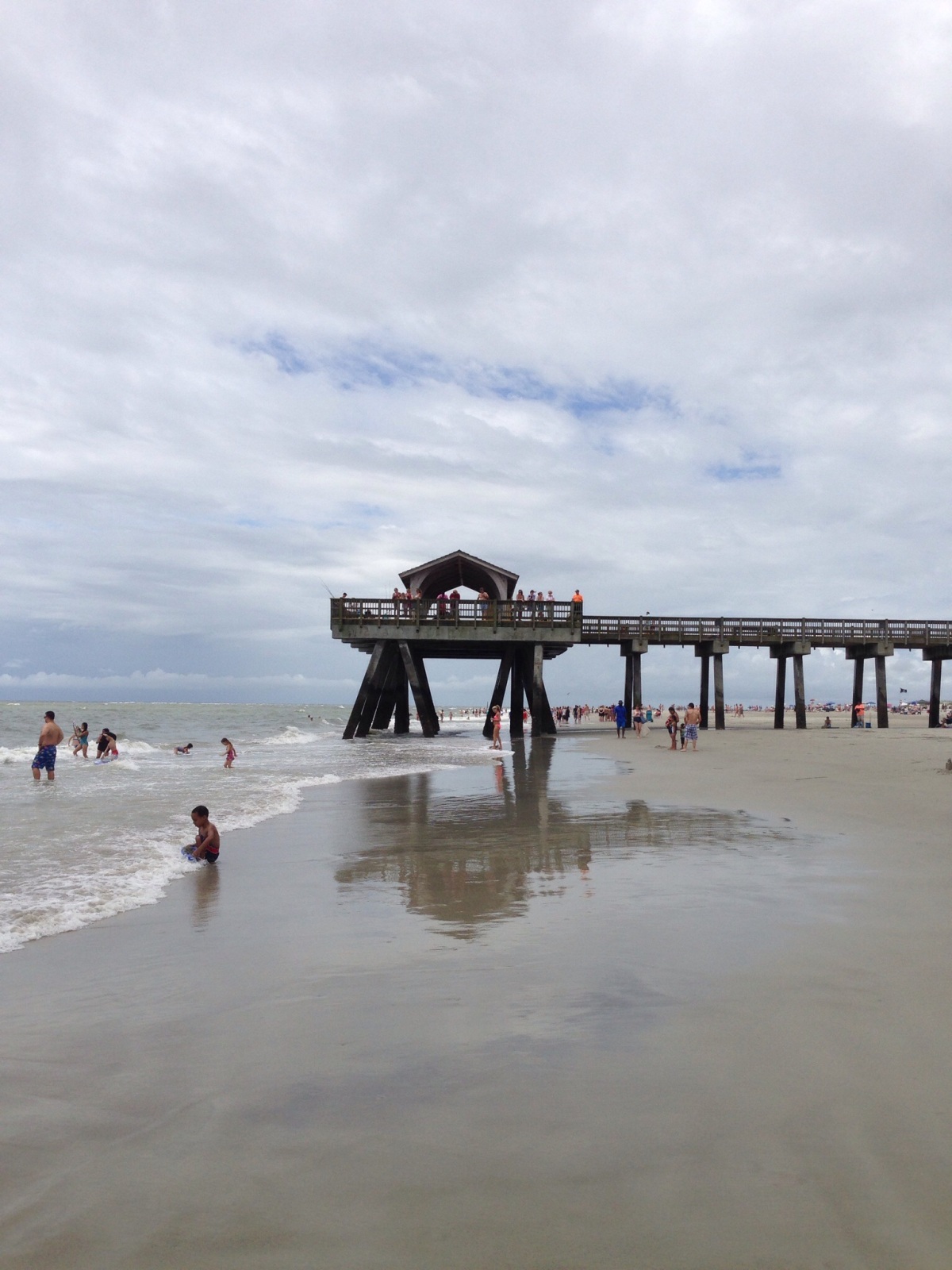 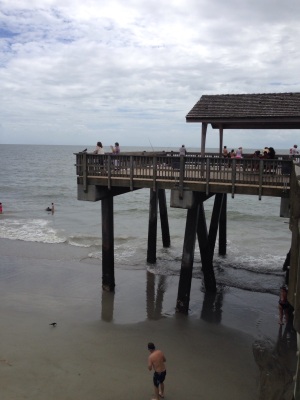 Friday was Folly Beach day, the day I walked on the second longest pier on the east coast of America. But that was Friday.

On Saturday, we headed to Tybee Island Beach located on the easternmost point in Georgia. I had drooled over some pictures one of my daughters had taken there and vowed to visit the site at some future point. That time arrived Saturday around high noon.

After Folly, I wasn’t expecting to be that impressed. My weekend mission was to see and take some photographs of Folly’s pier for a future beach book of photographs, so anything after that was gravy, in a manner of speaking. Folks, I was absolutely overwhelmed with Tybee Beach. Crossing the Lazaretto Creek Bridge, surrounded by salt marshes on both sides, was a precursor to awe-inspiring vistas beyond.

Before setting foot on the beach, we rode around and around and around trying to figure where and how to park. We could see that there were parking meters everywhere (even at Arby’s where we considered getting a snack), but we had no change to put in them.

“There must be something we don’t know,” I said. “Everyone else has figured this parking thing out, and so can we.”

“Well, I wish somebody’d tell me,” he said, jerking the car to an empty spot on a side street.

Slamming the door behind him, my husband jumped out to take a look at one of the parking contraptions. It looked like a meter but was actually a device that delivered tickets for two-hour blocks. He slid the debit card through and thankfully saw that we had two full hours to stroll about and make some discoveries.

We finally found a parking spot in the half-mile long parking lot and headed towards the ocean with all of the other day-trippers. It was low tide, and the strand was wider than any beach I’d ever visited. Naturally, I had to experience the strand in a more personal way, so I took off for a walk to the left of the pier. The sand was hard and packed. The water was warm. The beach goers were reading, sleeping, chatting, eating, staring out to sea, and watching their children play in the surf.

These are the same kinds of things they do in Myrtle Beach, I thought. So what’s so different?

I never came up with an answer to that, but I think it had something to do with the way people parked their cars and then walked in what seemed to be swarms to the beach. The beach was so wide that probably twelve to fifteen “layers” of people lounging on chairs and lying on towels were stacked between the ocean and the dunes. And did I mention that several dozen people were actually camped out beneath the pier? It’s that wide and that long!

After getting my feet wet in the ocean, known as “the pond” to Tybeeites, I walked up the steps to the Walker Parker Pier. Located at the end of Tybrisa Street, the historic pier has picnic tables, a snack bar, music, and restrooms in its pavilion. According to the signs, the pavilion is a popular spot for musical performances, dances, and other events.

We walked the length of the pier, gawking, stopping for photo ops, and interacting with various strollers. We met a young couple celebrating their fifth anniversary who had left their four children behind with grandparents. When I asked the young mother if she missed her children, she giggled and showed me a bagful of souvenirs for them. And then there was the couple from VA who was leaving on a Caribbean cruise the next day. We snapped their picture, and they returned the favor.

It’s Wednesday now, four days since the Tybee Island visit.  No matter how stressful, busy, sad, or upsetting future days might be, I hope I can recall the ocean breezes, the wide sandy beach, the people hiding in the shade beneath the pier, and the roar of “the pond,” and know that somewhere there’s a beach where all is right with the world. 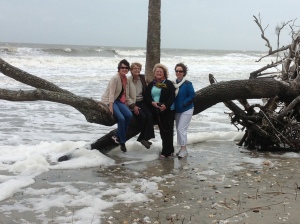 How you feel about love these days? That’s my writing prompt for today, and it’s just what I needed to get my muse mojo going. After the sights and sounds of love that I experienced this week, the prompt is perfect. Every day for the past several days, I’ve been privileged to look into the faces of people dear to me and to hold my grandchildren close to my heart. I’m fascinated with Ethan’s blond hair and Olivia’s steadily increasing vocabulary. And the Maseda grands who live near Savannah? Each one is remarkable and well-loved.

It’s easy to love my grandchildren and their parents. In fact, I love all of my family, including the extended ones and the ones I don’t get to see often. My friends are dear to my heart too. I’ve studied several theories of friendship over the years, and I must admit that they all apply to my friendly relations. Some of us have been friends since we were preschoolers while others arrived more recently on the scene. Still, I love them all.

But what about those “other people,” the ones who are “different” from you and me? Aren’t we supposed to love them too? I’ve been thinking about that quite a bit lately too, largely because of Independence Day and the huge variety of people I’ve seen. Honestly, at the Myrtle Beach State Park this week, I’ve seen just about every shape, size, race, ethnicity, and race that there is. I’ve heard several different languages and sniffed numerous aromas emanating from the picnic tables and grills at the state park.

And how do I feel about it? I LOVE it! I love the diversity of people, customs, language, and traditions, and I love the USA. It’s a land choice above all other lands, and thankfully at some time in the past some of my ancestors made the decision to immigrate here. So did yours, unless you’re a Native American.

Back to love. Love is the most important emotion and force in the universe. It motivates us to action, soothes our wounds, binds us together, helps us grow, and sometimes breaks our hearts. Love is much more important than all the silver and gold in the world although everything, including love, goes a little more smoothly with money. I’d like a little silver and gold too. It’s just that for the essence of life, nothing can beat love.

There are several definitions of love, but the one I’m thinking of this morning has to do with what Christ said when delivering the second greatest commandment. In case you’re like me and need a little reminder of what that is and where to find it, look in Matthew 22:39: “Thou shalt love thy neighbor as thyself.” He didn’t say, “Try to love this person if you can.” He essentially commanded us to do it.

He didn’t say love the people of your tribe, family, race, social class, or political party ONLY.  It’s funny how things you learn as a child stick with you, and yesterday as I walked along the beach, I saw such a diversity of people that I kept hearing the refrain of “Red and yellow black and white, all are precious in His sight.” It’s hard to do sometimes. Those people talking with the funny accents as I waited for them to finish rinsing their feet and chairs and buckets weren’t feeling too much love from a sandy-coated, hot me.

What I’m getting at is that it’s easier to love people that you’re related or who are in your friendship circle. It’s harder to love those who speak a different language, worship a different god, or have a different complexion. At the same time, is it okay to pick and choose the commandments we follow?

Tell me what you think, my fellow Americans. I keep thinking of examples of love I’ve seen this week, enough for another blog post. Stay tuned. I’ll write that one tomorrow.

So…back to today. For starters, I’m still in Myrtle Beach, and I purposely set my alarm for 7:00 o’clock this morning just so that I could have the experience of waking up at the time I used to leave for work. It was awesome! Then I read, interacted with my online classes, had a phone conference with someone I met at the South Carolina Writers (I know some of you want to put an apostrophe before that s in Writers, but there’s not one), and then went to the beach to walk for two hours.

The temps were in the 60’s, and the coolness itself put a little pep in my step. I ditched my shoes in the sea grass, thus enabling me to feel the cold water every few seconds as the waves splashed around my feet. Heaven! Strolling along and listening to music on my iPhone while watching birds, people, and the ocean was one of those peak experiences that Maslow referred to. At least that’s my take on it.

When I got back to our little duplex, I spied a picture that hung in my office(s) for decades. Called “Seawatch,” it’s of a red chair perched on the beach with a floppy hat on the sand beside it. Sea birds fly around the empty chair, and in the past whenever I’d get stressed (daily), I’d look at the picture and think, “Somewhere there’s a beach.” And there is.

Time to pack the car and head home after a marvelous few days of learning new things, meeting old and new friends, spending time with Elizabeth, and walking on the strand. Today’s experiences were just the kind I looked forward to all those years that I looked at the red chair in the sand. Don’t get me wrong. I loved teaching (still do), but I’m happy that my life has more of a work/play balance in it now.