Ethan is two weeks old today, and I’m remembering the day of his birth. I took care of his big sister Olivia (delightful experience) while we waited, waited, waited for news of his safe arrival. When her father called and told me that his 8 pound, 9  ounce son was here and that he wanted me to come to the hospital to meet the “little guy,” I gave Olivia some hugs and kisses and left her in the care of a neighbor and friend. Off I went to meet Ethan Paul. Above is one of the many pictures I took that night, a favorite because of the way Amanda is cradling her new love.

When I walked into the atrium of Northside Hospital to meet my new grandson that evening, I was immediately transported back to a day nearly two years ago. On that day, May 29th, 2010, several family members had gathered at the hospital to await the birth of Olivia Jayne, my son and daughter-in-law’s first child. I remembered the excitement, mine bordering on giddiness, as I climbed the stairs to the waiting area that morning.

That day we walked and talked and snacked and waited. And then we waited some more. We were allowed in and out of Amanda’s room for part of the day, and then the medical personnel shooed us out. As Teri, Amanda’s mother, and the rest of us waited and chatted, there was a feeling of expectant anticipation. We knew the moment was close, and yet there was nothing the four adults could do. It was in the hands of the doctor and Amanda. And God of course.

Chitchatting about various topics, none of them too serious, we hardly noticed the arrival of an older African American man who came to join our group. Truthfully, he didn’t so much join us as he just filled up an empty seat for several moments. There are lots of couches and chairs arranged in various combinations, and we had grown accustomed to sharing “our space” with an assorted crew of people as the day had progressed. He was just another seat filler…or so I thought.

The four of us continued to chat, and I tried to establish some eye contact with the newest member of our cluster. It was to no avail, and I could tell from my surreptitious glances that to him we might as well be pieces of furniture . He seemed blind to his surroundings and was dealing with some inner turmoil or heartache. For the entire ten minutes he sat amongst us, the man slowly and methodically ate M & M’s. He didn’t tilt his head back and jiggle several at a time out of the bag. No, he ate one by one. I wouldn’t say he was savoring them, but rather that it was something to do, something to assuage his pain.

That’s when I noticed a tear streaking down his cheek…and then another and another. I only saw his right side, but I’m certain the tears were coursing down both sides of his face. The juxtaposition between our emotions and his couldn’t have been more different or more obvious. Seeing his pain almost made me feel guilty for feeling so much hopeful happiness.

I’d like to say that someone offered him a tissue and that we became shoulders to cry on. But no, that didn’t happen. We continued on with our lighthearted banter and tried to ignore him, not because we didn’t care but rather because we respected him and his anguish. He’d built an invisible wall around himself and seemed to be saying, “I’ve got to get myself together before moving forward.” It was a private thing, and we all sensed and respected that.

I don’t know his story, but the cliché, “A spoonful of sugar makes the medicine go down” always comes to mind when I think of that elderly gentleman eating M & M’s on a May afternoon in Atlanta. I know that even when life seems intolerable and full of stress and loss and heartache, there’s always something good going on too. The sweetness could be in the form of some chocolate, or it could be some birdsong (like I’m listening to right now), a beautiful sunset, the laughter of a child, or the budding of some pink azaleas.

Today on Ethan’s two-week birthday, I’m thinking and hoping that the candy man’s pain has eased and that he  has some joy in his life. I know I do. And I’m thankful to this man for the reminder that while there’s pain, there’s sweetness too.

The fish fry on Sunday evening was nice. So was yesterday’s cookout at my mother-in-law’s house. I even enjoyed reading on the porch and listening to the rain yesterday. And Sunday’s spiritual uplifts were numerous and satisfying too. Still…….the absolute best thing about the weekend’s events was the birth of Olivia.

It wasn’t the weekend I had planned, but it was AWESOME. Beach bound at last, I was cruising along I-20 on Friday when I noticed that I had a missed call from Amanda, my daughter-in-law. I knew she had a doctor’s appointment that morning, and I wondered if he had given her any exciting news about the baby’s expected arrival. Originally due to arrive on June 7, we had reason to believe that Olivia might make her appearance a little earlier. And YES, that’s what  Amanda had called to tell me.

I took care of a couple of errands in Myrtle Beach and then turned around and headed for home. We left Camden early Saturday morning and arrived at Northside Hospital in Atlanta around 10:30. What an awesome place! I learned later that they deliver around 70 babies per day there…or 18,000 a year. I loved the Women’s Center with its design, tile, architecture, colors, and so forth. But that’s a story for later. Right now I want to concentrate on Olivia and her parents.

For about six hours, several of us alternated between visiting with the soon-to-be-parents, eating lunch, chatting, reading, sleeping, and waiting waiting waiting waiting. Three of us tried to read books we had brought along, but I can’t say how much we were able to concentrate. At one point, an African American man came and sat with us while he calmly ate a big bag of M & M’s. We watched and listened to three tours of expectant parents and tried to be patient (not with the tours but with the situation itself).

Teri, Amanda’s mother, and I were in the room about 3:45 that afternoon when the doctor came in and indicated that we needed to skedaddle. Teri, Frankie, Otis, and I sat in the waiting room and made small talk for the next hour or so, and I finally asked Teri what time it was. I thought, “Gee whiz, the doctor’s been in there about 50 minutes. What’s going on?” Ten or fifteen minutes later, he came bustling through the double doors and announced that all was well.

He asked, “So how much do you think she weighs?”

“Seven pounds on the dot,” I ventured. No one else said anything.

“Nope.  Eight pounds and three ounces! And Amanda did great. Soon you can go in to see them both.”

He walked off and we began to laugh and talk again, giddy with our happiness and relief.

Soon Teri’s phone rang, and we were all invited to come back and meet Miss Olivia Jayne Crolley. There was Amanda sitting there as pretty and perky and serene as possible…and over in the rocking chair was Paul holding their beautiful new daughter. We grandparents all took turns staring at her precious little face, and of course, we all got to hold her as well. Once, she actually opened both eyes and looked at me as if to say, “Here I am. See, there was nothing to worry about.” Honestly, we communicated a lot in that brief glance, soul to soul, spirit to spirit. Okay, laugh if you want, but hey, I’m one of her grandmothers, and I know what that glance meant. 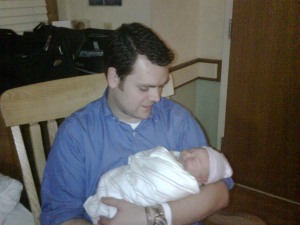 Later, two nurses came in to give her a physical and a bath. Loved the tiny pink bathtub! The nurses were not only professional and knowledgeable, but they were also “into babies.” I could tell by the way they touched her and talked to her. After her bath, Paul dressed Olivia, including tiny pink booties, mittens, and a hat. At one point she grasped his finger as if to say, “Hold on to me, Daddy.” One of the nurses fashioned a bow for the hat, and it definitely added to her little girl sweetness.

Alas, the hour was getting late, and we needed to get back home. We told the little family good-bye and drove home (in the rain), arriving close to midnight. It was sad to leave them, but as I’ve told my children many times, “In every good-bye, there’s a promise of another hello.” In just a few short days, I’ll get to see the tiny sweetheart and her parents again.

P.S. I must add that another highlight of the weekend was seeing Braden, Brooke, Emma, and Colton dance to one of Michael Jackson’s songs on Skype.  It was AMAZING and the perfect way to end Sunday.