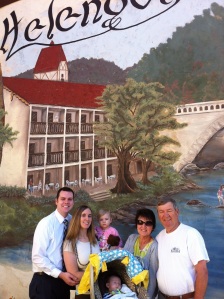 This weekend my husband and I went on a little anniversary getaway to the mountains of North Georgia. While we did a lot of sightseeing there and back, most of our time was spent in Helen, GA, a unique replica of an Alpine village. We stayed at the Helendorf (more on this later) which is located on Munich Strauss, one reason being that the appearance of the hotel sounded more German than Day’s Inn on Main Street. The other reason is that my son Paul and his family were going to be staying there Saturday night, and I wanted to snag the chance to see them as often as possible.

We hiked, shopped, ate at some interesting restaurants, and in general, just did the “tourist thing.” We especially enjoyed watching the people tubing down the creek and vowed to do that the next time we go there. We also like watching the fishermen (didn’t see any fisherwomen) standing on the rocks of the creek casting their lines out again and again hoping for a big catch. We overheard a woman asking a shopkeeper if he knew where she could get some moonshine, and this naïve small town girl wondered WHY when alcohol seemed to be flowing so freely in the town.

On one of our walks we spotted some horses in a field, and they came over to socialize with us a few minutes. We stood there talking to them, and just as I began to wonder what in the heck one was supposed to say to a horse, a man from across the street came up and gave us a bag of carrots. “Here’s what they want,” he said. At first we were a little hesitant to take the carrots, but after he assured us that he kept several bags on hand for just that purpose, we took them. I loved our little walk that morning; it was breezy and cool and unrushed.

Time is a bit short this morning, so I need to get to the purpose of this post. A couple of decades ago I was at Girls’ Camp with some young people, including my two daughters, from our church. Not a “roughing it” kind of gal, I was only staying for one night, and maybe that’s why the ambience of the camp made such a lasting impression. Tucked away in the woods away from civilization, the area was peaceful and beautiful. That night we walked to a pond and placed candles on the water as reminders to let our lights shine. Seeing everyone’s candles gently floating together was a phenomenal sight and served to illustrate the power of unity and strength.

Of all of my memories of my time there, something else that has stayed with me through the years is a cross stitch sampler hanging in the dining room that read, “We may never pass this way together again.” I’m not sure why that impressed me so much but it did. I looked around at the faces of the people there and knew the truthfulness of that statement. Although I would see most of them again, it wouldn’t be in that setting, and it was then that I decided to  relish every moment that we were together. I also decided to do the same for other life experiences down the road.

So far, I’ve been pretty good at seizing the day and relishing the moment…and recalling them later. This past weekend was no exception. That’s one reason Amanda and I were determined to have family pictures made by the hotel mural before we left. While it’s true that you can hardly see baby Ethan, we can see enough of his face to let viewers know how beautiful he is. And then there’s precious Olivia with her brown bear. All dressed up to go to church in nearby Mt. Airy, she’d been nibbling on Cocoa Puffs just a few moments earlier.

As I look at the picture of all of us, I’m reminded of all of the moments we experienced together (and separately too). Some of mine include watching Paul throw Olivia up in the air in the heated pool the night before as she squealed with delight, the sounds of the babbling brook and laughter of the tubers as they floated by, the taste of the German potato salad that we sampled on Saturday night at the International Restaurant, the gurgling noises of the motorcycles, the sights and sounds of the hike to Anna Ruby Falls, and the ambience of the little village itself.

Will we meet there again? I hope so. I’d like to go tubing with them…or watch the babies so that Paul and Amanda can go. But even if we don’t meet on Munich Strauss again, at least our paths crossed there for a few brief hours.

Before yesterday, I’d never tasted citrus rice before. Ummm. It was delicious, especially the small chunks of pineapple. On our way back from Atlanta, some friends and I stopped in Madison, GA for lunch and a bit of antique browsing. We ate at the Chop House, a wonderful diner with sage green walls and huge windows overlooking the tree-lined streets. We opted to sit outside on the Chop House Patio where the ambience was even better. Except for the occasional cigarette smoke wafting over from a nearby table, it was what Van Morrison would call fantabulous. The food, the conversation, the temperature, the gentle breeze, our fellow diners, our server, the white china rimmed in black, a small lizard, and the sight of the surrounding trees beginning to change colors all combined to make it memorable. To add the icing on the cake, Nancy regaled us with hilarious tales of her father during her dating years. It’s always good to laugh and talk with friends.

To backtrack a bit, the four of us went to New York together in May and seemed to get along well (except for that business about leaving me at the Brooklyn Bridge, that is). Just kidding, Lisa.  Anyway, with one trip behind us, we knew that we traveled well together and that we liked many of the same things. Hence, when I learned that Chicago was playing in Atlanta at the fabulous Fox Theatre, I asked it they’d be interested, and they said YES. We asked some other people if they’d like to accompany us, but they all declined. Maybe next time.

We left Nancy’s around 10:00 a.m. Friday morning, and after a couple of stops along the way, we finally arrived in Atlanta six hours later. Our husbands and families probably won’t be too surprised to learn that we talked pretty much nonstop. As a consequence, we came up with solutions to the nation’s healthcare problems and education issues. We also discussed the economy, SC’s recent embarrassments, and the lack of civility that surrounds and astounds us.  We also talked about more down-to-earth and personal topics, but I’ll never tell. Suffice it to say that we all agree on the importance of family, past and present, and relationships.

Before the play on Friday night, we ate at an Italian restaurant near the theatre where the food was good, but the atmosphere was anything but. The acoustics were horrific, and finally the four of us gave up trying to have any semblance of a conversation. After dinner, we walked down the block to the fabulous Fox where we were greeted by a tall, courtly African American man whose hospitality and Southern charm were contagious. Once inside, we admired the atmosphere and décor, especially the star studded ceiling.

I think I speak for the four of us when I say that the production of Chicago was well worth the price of the ticket. The lead roles played by Velma and Roxie were especially riveting. These women are so talented! While we thought that Jerry Springer did an okay job of playing Billy Flynn, we were disappointed that he didn’t dance more. He just seemed to lack the razzle dazzle of Richard Gere who played that part in the movie version.  The only “fly in the ointment” that evening was the price of souvenirs. I really really really wanted a tee-shirt that said “Not guilty,” but $35 put it out of my price range.

After the musical, we went back to the Georgian Terrace where we had reservations. It’s a lovely hotel with lots of good feng shui, and I especially liked the marble floors and the sound of mellow, jazzy music in the background. Before retiring to our room, we sauntered through the restaurant that had both inside and outside seating.

Saturday morning, Nancy visited with her son, and Paul and Amanda picked up Lisa, Martha, and me, and we breakfasted together at the Flying Biscuit.   Since I got to break bread with two of the people I love most in the world, this event was especially sweet for me. Our round table was beside an open window (literally no pane) and was painted with stars. Stars and flying biscuits adorned the walls of this unique eatery as well. As we dined, we were treated to close up views of walkers, joggers, and dozens of dogs. It was nice to be in midtown Atlanta with its teeming life and variety. If you ever make it to the Flying Biscuit, be sure to sample the cranberry apple butter. Amanda, Martha, and I highly recommend it. Breakfast complete, Paul drove us to see the Margaret Mitchell house. Since Martha teaches literature and Lisa teaches history, seeing it was a fitting way to end our short but exciting trip to the big City.

On the road again, our conversation resumed. As mentioned above, we did a lot of talking about our families, especially those ancestors who have influenced us so much. At this stage of my life, I LOVE that stuff, the links from the past to the present and the consideration of  how those links will affect the future. I’d write more about it, but it’s time to do some serious D2L work and some preparation for tomorrow.