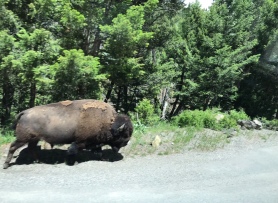 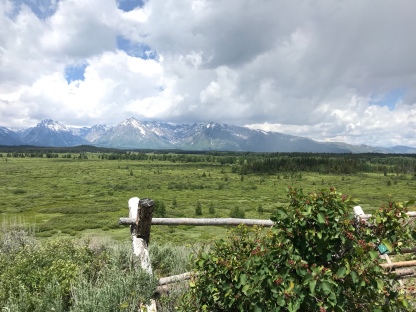 The allure of Yellowstone with its geysers, hot springs, and paint pots is what initially sent us on the National Park Tour with Gate 1 Travel. We enjoyed every moment of it. Three weeks later I’m reminiscing about the two bison who stopped traffic in both directions as they moseyed across a narrow mountainous road and continued their slow amble on the other side. They were either oblivious or uncaring about the presence of so many humans being stalled by their promenade.

After two days and nights, we departed the town of West Yellowstone in Montana for the Grand Teton National Park in Wyoming. Our Gate 1 itinerary describes the park as having “jagged peaks, glaciers, lakes and dense forests rich with wildlife.” That’s an understatement for the breathtaking views of the Snake River, Colter Bay, and the scenery around Jackson Lake Lodge.

At the latter location, several people hiked up a wildflower-covered hill to an area where John D. Roosevelt reportedly retreated for his lunch break. The views were spectacular, the temperature was moderate (60’s), and the breeze was gentle. We caught sight of moose and elk on our downward trek, and Browning’s words from Pippa Passes came to mind. “God’s in His heaven—All’s right with the world!”

We climbed back on the bus, and shortly before arriving in Jackson Hole, we stopped in what appeared to be an isolated spot. Although there were a dozen or so people sauntering around, the area felt quiet, serene, and well, hallowed. There sat a small wooden building called the Chapel of the Transfiguration. I wish I had taken more pictures because my words are puny in describing the small sacred structure. 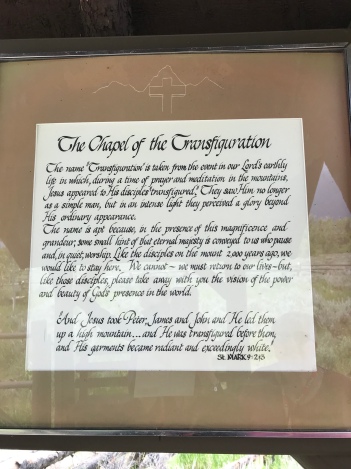 Once inside, we felt shut off from the world, protected somehow from outside influences. When I say “we,” I mean all of us. If any talking took place, it was in hushed tones. Touched by strong emotion, a few people cried. On the way out, we left a few coins for some beautiful postcards to help us remember the spirit of the place. If you ever happen to be in or around Jackson Hole, go to Moose.

Later, we arrived in Jackson Hole, Wyoming, and about half of our group went rafting. We opted to discover all we could about the town itself and shared a late lunch/early supper with our new friends, Naomi and Floyd, at the Bunnery Bakery and Restaurant. The food was so gooooooddd that I went back early Monday morning to purchase some treats for our journey home. Other eateries we enjoyed are the Smokin’ Iron Bar & Grill and The Merry Piglets, the former for its ambience and the latter for its tasty Mexican food. 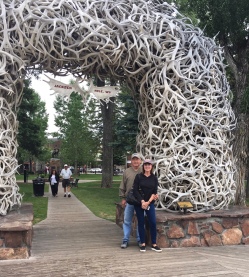 Having never been to Jackson, we didn’t know what to expect, especially since it was June and not skiing season. We soon fell under the spell of the town surrounded on all sides by low mountains and ski slopes. It’s a virtual shopping mecca, artist colony, cowboy town, and entertainment & dining. One evening at an event called Jackson Live, we saw police men and women riding their horses as they patrolled the area. We also saw several cowboys remove the spurs from their boots before entering restaurants, a far cry from what we’ve grown accustomed to seeing in the South, especially the coastal area: sandals and flip flops. 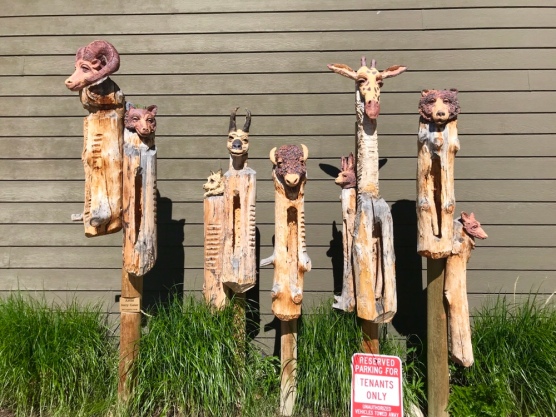 On the second day in Jackson, we took a bus to Teton Village, a quaint shopping and recreation area about twelve miles outside of town. In addition to tram rides, horseback riding, skiing, and hiking trails, there are also lodging and dining options, and we ate ginormous slices of pizza while sitting at an outdoor restaurant. While we enjoyed the views, we were a bit travel weary by this time (the last full day of our trip) and had already seen so many wondrous things that we might have become a bit jaded. 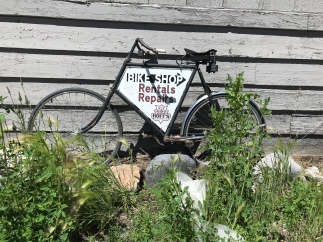