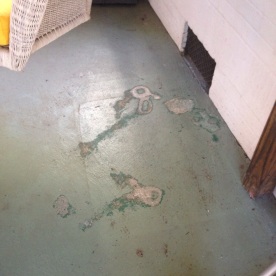 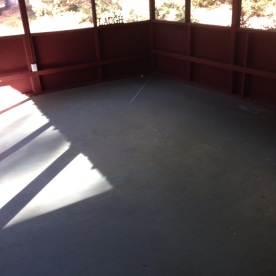 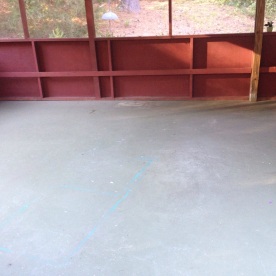 Can I really do this?

If not for the blogs I read, the ideas I saw on Pinterest, and the YouTube videos I watched, I never would have attempted painting the back porch, much less get creative with it. But I looked and listened and mustered up the resolve to just do it. If I can do it, anybody can. For the next couple of days, I’m going to break down the task in the hope of inspiring someone to take on some DYI project she’s (or he’s) been procrastinating.

Have you ever been absolutely fed up with how something in your house or yard looked? Have you ever said, “I wish I could do so and so with that slope, porch, room, patch of ground, or wall?” I have. This time, however, I took action. I realized that no one was going to beautify this space if I didn’t do it. And since I’m too stingy and stubborn to pay someone for something I think I can do, well, I did it.

I painted the screened-in back porch.

It looked horrible, downright nasty in places. Not only was the color a putrid shade of green, but the paint was coming off in places, but not in a chipping, peeling sort of way. More like someone had poured a bucket of acid on various spots on the porch floor, leaving a few areas with a leprous appearance. I’d tried covering those spots with small rugs, but I always knew what was beneath them. And besides, who puts a put beneath a window where there’s no traffic? No one—unless there’s something to hide. And there was, there sure was.

For month, years in fact, I had talked about painting the back porch. My husband’s customary response was to hide his head in the sand, pretending not to hear my suggestions. When he did respond, it was typically in either a cautionary way or a negative one.

Me: “I think we should just move all the furniture off the back porch, clean it, and then paint it with some porch paint and add glitter.”

Me: “Yeah, Carol and Randy did that to their garage floor, and it looks fantastic.”

Him: “That’s a garage floor, not a back porch.”

There are several variations on the above theme, but all of them had the same ending: No Go.

Then one day I decided maybe we should just get rid of the screened-in porch and make it a sunroom instead. I was not really sold on that idea enough to really sell it to the hubs, however, mainly because you can’t hear birds chirping and children playing when you’re in a glass-enclosed room. And then there was the fact that neither of us really wanted to spend the money, not just for the work itself but also for the increased utility bills.

One day my frustration with the ugly room reached an all-time high, and I decided to take on the project by myself once my husband got involved with hunting season. In October of each year, he spends a week in the woods hunting, cooking, and listening to tales by a campfire.

I told him of my plans to transform the room, and on Monday of that week I went to Lowe’s to buy the materials: concrete cleaner, a stiff brush to scrub the concrete with, a roller and paint tray, and paint stain with built-in sealer. Monday afternoon, I removed all the furniture from the porch, hosed it down, applied the concrete cleaner, and worked like the dickens to remove some of the prior paint and a lot of crud.

The only difficult part of the cleaning afternoon was using a water hose without a sprayer. I didn’t know it was missing until I was ready to start working, and I knew I might lose my momentum if I stopped to go back to Lowe’s. Moral of the story: Make sure you have Everything (capital E) before you start.