My last post ended with the anticipation of the bus ride through the Whittier Tunnel, the only passageway between us and the Coral Princess. Like it or not, we had no choice but to go through it no matter how intimated we might feel. Sitting still as statues, the other passengers and I looked straight ahead throughout the entire two and one half miles. If anyone spoke at all, it was in whispered tones, but for the most part, we were quiet, our eyes straining for a glimpse of light at the end.

I almost laughed with relief when I finally saw the light.

The bus emerged from the tunnel and took a curving road to the left. There she sat in the harbor, the Coral Princess. As the driver parked the bus, I looked to the mountains to my right and saw what appeared to be apartments. Later, the woman checked our passports told me that’s where most of the town’s residents resided. Most of the time, she said, that was about 200 people. Now, however, approximately 400 people lived there, many of whom would leave after the last tour of the season: ours.

The baggage handling was a snap and was efficiently taken care of by Princess employees. The passengers stood in line for about twenty minutes, and then we were out the door and walking up the gangplank. Once inside the ship, I noticed a man to our left taking pictures of all who came aboard, including us. We gave him tired smiles and then went in search of our room on the Baja Deck, Room 626. 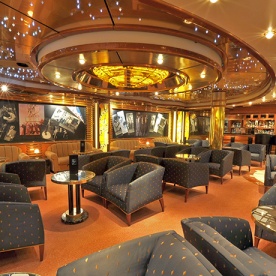 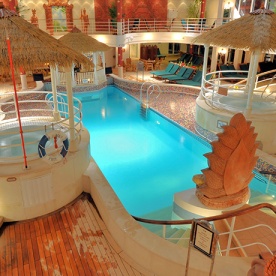 Happy with our home for the next week, we went exploring and oohed and aahed every few minutes—er, seconds. There were several restaurants, a variety of stores, a casino, a theatre, a lounge, a bar, an outdoor movie screen on the top deck, hot tubs, a library, and plenty of other attractions. I knew right away that none of us would have occasion to say, “I’m bored.”

That evening, we had dinner in the Bayou Café, and our primary server was a delightful young woman from Macedonia. Pleasant and outgoing, her most frequent expression was an Italian one: “Mama Mia!” She and her two assistants made our first dining experience one to remember. Very attentive, they made certain everything was just right.

The menu was extensive, and although two of us ate salmon (after all, we were in Alaska), the others of our party sampled a variety of entrees. One of the men at our table enjoyed his shrimp cocktail so much that he ordered two. After all, he reasoned, we had paid for everything ahead of time. Not even the most disciplined among us could resist dessert. From tiramisu to shortbread and tarts to mousse, there was something delectable to suit even the pickiest of palates.

As we walked back to our cabins, we chatted about what the following day would bring. We knew we’d be at sea throughout the night, and much of our conversation revolved around the anticipation of that experience. About that time, we heard a loudspeaker reminding everyone to report to a “muster station” to learn what to do in case of an emergency.

The muster station experience brought reality home: You are traveling on a huge ship with hundreds of other people. Look around you! If something goes wrong, these are the people you’ll be sinking with!