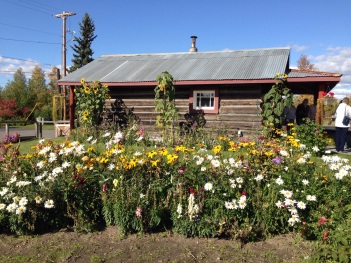 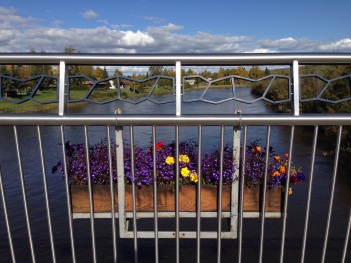 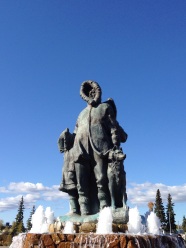 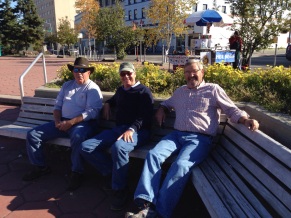 Should I start with a favorite memory and work backwards to the beginning of our trip to Alaska? Should I just highlight a few of our favorite sights in no particular order? I think I’ll take Lewis Carroll’s advice and begin at the beginning and go on until I reach the end.

We began our adventure in Charlotte with stops in Minnesota and Seattle. From Seattle, we flew into Fairbanks where a shuttle was waiting to take us to the Princess lodge. On the shuttle ride, the driver kept talking about the Northern lights and reported several sightings that evening, and when we arrived at our destination, there they were—green and ethereal moving clouds on the horizon.

To make sure we got the full effect, the driver steered the van around back and insisted that everyone pile out to take a better look. That, my friends, was my introduction to Alaska, and I knew I was going to love every moment of my stay there. Nearly every person we met was just as friendly and accommodating as this driver.

Too excited to sleep in, we awoke early the next morning to check out our environment. It was beautiful, especially the river walk behind the lodge. Around noon, we took a bus into Fairbanks and walked up and down some of the streets in the center of town.

One stop we particularly enjoyed was a park with a walkway along the Chena River. There was a unique “antler arch” leading to the walkway, and naturally we all took turns posing beneath it. We moseyed along enjoying the breeze, the yellow willow trees, and the gently flowing river. As we stood admiring a huge statue entitled “First Family,” I became aware of a woman in distress, alternately sobbing and shouting, sitting several yards away from us.

As I wondered what to do (if anything) to help her, music began wafting through the park, and nearby church bells began to peal. It was a memorable moment, especially when the limbs and leaves of the willow tree began to sway in the breeze. When I glanced at the suffering woman to see whether she had been affected by the sounds and sights, I saw that someone had joined her and was hugging her and speaking soothing words. My friend Deborah would call it a “God wink.”

We left the park and sauntered around going in and out of various shops. Spotting some huskies outside of a building, we began listening to their trainer and learned we were at the headquarters for the Yukon Quest, a 1,000 mile dog race between Fairbanks, Alaska and Whitehorse, Yukon. Until that afternoon, I didn’t even know what a musher was. Soon I learned that many of them will begin this race, said to be the toughest dog sled race in the world, on February 6. Musher—now that’s a word.

Hungry from our sight-seeing, we stopped for some refreshment at the Fudge Pot, a downtown eatery recommended by a friend who had dined there many times. We loved it! The smell of delicious chocolate greeted our senses as we pushed open the door. We settled on dark chocolate walnut, but before we allowed ourselves even one sliver, we recharged our batteries with fish chowder and sandwiches.

With 45 minutes to spare before the bus arrived, we visited the Morris Thompson Cultural & Visitors Center. In a word: awesome. All of us especially enjoyed the museum aspects of the facility and came away with a renewed interest in the culture and people of the 48th state.