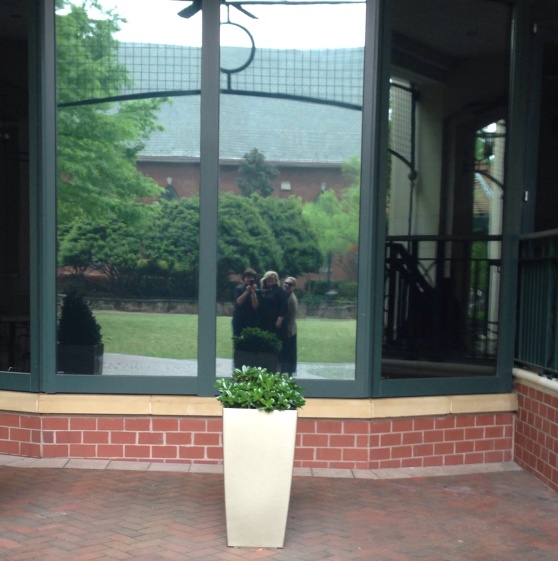 Last week a couple of good friends and I went to a Women of Vision exhibit at the Mint Museum in Charlotte, NC, and we had a great time.

Wait. It was great, but it was also consciousness-raising and thought-provoking. Although I have a copy of the book by the same name, seeing the enlarged photographs up close and personal was a sobering experience. Reading more about the stories behind the images and hearing the photographers discuss them have haunted me all week.

We saw a child with Monkey pox, a virus caused by eating contaminated meat. In this case, the child had eaten Gambian rat, the only choice in town so to speak. Starve or eat rat? That’s what psychologists call an avoidance/avoidance situation, one in which neither alternative is good.

My friends and I had just dined at Chicago Dog across the street, a diner with lots of atmosphere and several delicious food choices. Our conflicts were of the approach/approach variety since all options were attractive.

We saw a frail-looking 5-year-old bride posing with her 25-year-old husband and another child bride howling with fear and as she rode with her family to her wedding. We also looked into the eyes of an 11-year-old who had attempted to commit suicide by catching herself on fire rather than succumb to a life of sexual and physical abuse.

On the way to Charlotte we had talked about gender issues, including the incidence of cohabitation, the elaborate venues of today’s weddings in America, and the quest for romantic love.

We also saw girls in Mumbai standing in front of their cages. They were prostitutes with no education and few choices.

Here in the United States, education is a right and responsibly for all of its citizens…including the females.

After viewing the exhibit, I was a feeling a bit melancholy, not for myself but all of the injustice and unfairness in the world. How and why did I get so lucky?

Something else that niggled me was the oft-quoted reminder that no one gets to heaven without a belief in Christ. And yet I was 99.9 percent sure that none of the above people had heard of Him. Did the child in the Congo with Monkeypox go to hell? And what about his mother who sat weeping beside his bed day after day, week after week?

I could not/will not believe that something so unfair can happen.

A couple of days later, I read a Face Book comment by one of my nephews that sent me to Mere Christianity, one of C.S. Lewis’s most profound and popular books. Although I had read it many times (especially some chapters), on this day I opened the book right to the following sentence:

But the truth is God has not told us what His arrangement about the other people are.

It’s not that Lewis knows the answer to all mysteries, but he’s certainly further along the path of understanding than I. For the moment, I feel better about the child brides, the Monkey pox victims, the starving children, and the prostitutes. God has not told us about His arrangements.

Have you ever had similar thoughts and feelings? How did you deal with them?