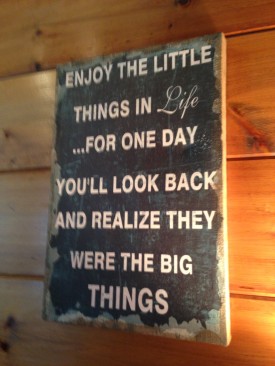 There’s nothing like a birthday to make one pause and reflect on where she’s been, where she is, and where she’s going. Serious reflection is even more likely when the celebrant is crossing the line between middle and later adulthood. That’s right: 65.

Years ago I came across William Hazlitt’s pronouncement that no young man believes he will ever die. “True for young women too,” I thought. If young people truly thought about the inevitability of their own demise, they’d probably do things differently, with more gusto and verve. They’d say yes more often to opportunities, adventures, and experiences and no more often to obligations that involve drudgery or cause resentment.

What’s the meaning of life? Does my life have meaning? Are people and relationships and connections (even those across time and cultures) what make life rich? These and dozens of other questions crossed my mind last week. To be honest, I think about those sorts of things quite often. I think it was Socrates who said that an unexamined life is not worth living.

I’m not sure (is anyone?) about all of the answers to the above questions. I do know that people count and that relationships need nurturing. I know that everyone you see is, has been, or will be fighting a hard battle. Everyone needs a hand, a hug, or a smile from time to time. Sometimes people need a lot more.

Last week when one of my daughters-in-law and I were chatting on the beach pondering such issues aloud, I told her that Thomas S. Monson, President of the LDS church, always asks for the same birthday request each year: that each member do at least one good deed on his birthday. He needs no gifts, and nor do I (but don’t tell my husband or children that!).

Seriously, what I’d like for a belated birthday gift is for every one of my friends, relatives, and acquaintances to do something nice for another person. This could be paying for their meal in a drive-thru, giving a few dollars to a homeless person (even if you disapprove of what you think he might do with the money), spending time with a child, or simply paying someone a compliment. Mark Twain said that he could live for two months on a good compliment, and really, how hard would it be to give one???

About spending time with a child, this has one major qualifier. Make sure you give him or her your undivided attention. Put your cell phone away for a few minutes and really get to know the little one better. Recently I read about a person who said he could see a child’s internal light begin to dim when trying in vain to get his dad’s attention. The father was holding the child on his lap but was too tuned in to Facebook, a game, or a news report on his phone to even look at the child. Come to think of it, it’s not just children. It’s anyone we’re in a relationship with. Could you turn off the television for a few minutes and actually look at the other person while he/she is telling you something?

Enough instruction! You know as well as I do what constitutes something kind. Just go out and do it for my birthday. And me? When talking to my daughter Elizabeth, I told her that I was going to try to do 65 good things for people this week.

“Why not make it this month, Mom? A week doesn’t give you much time.”

So from now until the end of August, I’m going to commit up to 65 charitable (loving, nice, kind) acts. Later today, I’m going by a neat store called Coccadots and get some cupcakes on the way home from Myrtle Beach. I’m giving four of them to a special group of teachers, the Core 4, who teach at Aynor Middle School. And I’m counting this as four nice things instead of one. I have to get to 65 the best way I can!

What about it, Folks? What is something nice you can do to make my first chapter of later adulthood better? Will you accept the challenge?