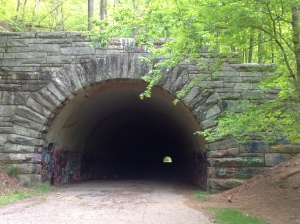 There was a brown journal in the small cabin where we stayed in Bryson City, NC  a couple of weeks ago that was fillled with advice, suggestions, and memories from the people who had stayed there. If we hadn’t read the journal, I doubt that we would have heard of The Road to Nowhere and the spooky tunnel at its end. Since several people wrote about it, we decided to take a look for ourselves.

Amazingly, Everett Street, one of the main thoroughfares in Bryson City, just ends a few miles outside of town. It doesn’t fork off to the left or right. No, it’s a dead-end. Once we had traveled as far as the road would take us, we parked the car, walked a few steps, and there was this amazing structure, a tunnel about 1/10 of a mile long.

Sometimes tunnels are creepy and scary, especially the underground ones. No wait. I think the underwater ones are pretty intimidating too. I recall riding in one to Fort Monroe, VA with my brother and his wife a few years ago and being so relieved when we saw that little speck of light at the end of that tunnel. The Bryson City tunnel was “average creepy.” Dark and dank with graffiti covered walls, it had an eerie ambience, and we walked briskly through it.

I’ve written about the light at the end of the tunnel concept often. Sometimes a person can be in the midst of some trial or heartache and start believing it will never end. It could be the demands of taking care of young children, the stressors of attending college while juggling home and family responsibilities, or dealing with the challenges of illness. Just like the person in the middle of a tunnel, you feel boxed in. Everything is dark, and you can see no relief in sight. And then one day, there’s a little pinpoint of light. It gets larger and larger until finally you can actually see the other side. THE LIGHT!

There’s truly light at the end of the tunnel as you realize that things are getting better. Some issues people deal with are long term. Raising children is a lifelong commitment, but there are moments even in the throes of the diaper changing days that are blissful. In college, there are moments of clarity, insight, or peace when you know you can make it. And as for the illness aspect, one day you realize that you can eat again without feeling nauseated or stand up without feeling wobbly.

A tunnel mentality can be applied to so many areas of  life. Just yesterday, a friend who’s planning a trip abroad said that at one time in her life she couldn’t have afforded an overnight trip to Myrtle Beach. In her words, the family “lived lean,” and she was always stressed out about whether the bills would be paid. She doesn’t know what the future holds, but for now there’s illumination rather than darkness on her finances.

I realize that all of the above scenarios are simplistic. Perhaps you’d like to add your own experiences with light at the end of the tunnel. Please do. There’s surely someone in Blogland who can benefit from reading it/them.

One thought on “Light at the End of the Tunnel”