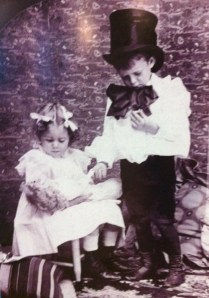 One of the nice things about having a personal blog is that I can write about anything that crosses my mind. Therefore, this is sort of a hodgepodge blog of topics ranging from exercise and health to family and faith…and a ton of stuff in-between. For instance, sometimes the blog becomes a travelogue, and other times I might decide to pontificate on politics.

That said, today’s post is about a revelation (that’s what I’m calling it) that I got in church Sunday. I had been pondering an issue that someone near and dear to me was having, and then suddenly the speaker said a few simple things that provided immediate insight. He began by talking about the importance of families, and then he shared some relevant stories from his childhood. It was a fabulous talk, filled with several references to scriptures, pertinent articles, and personal experiences.

Here’s one of the stories that I particularly liked, probably because of the underlying lesson. As a young child, he and his younger brother had the task of watering onions on a huge family farm. The onion planting was somewhat experimental, and the adult males on the scene, the speaker’s father and grandfather, had rigged up some newfangled way of making sure that the plants were watered. Unfortunately, the scheme didn’t work as well as planned, and watering became a hot, arduous, and dreaded task.

“You might wonder why we did it,” he said. The speaker then went on to say that he and his brothers and other siblings clearly understood their role as children and the adults’ roles as parents and grandparents. “As children, we knew we were to do what our parents told us to do, and although we didn’t always like it, we also knew that it was eventually going to be for our own good. It’s the same type of relationship that we have with God. We need to do what he tells us to do just like children need to do what their parents tell them to do.”

That’s when it hit me—the parallel between God’s instructions and those of earthly parents. He doesn’t tell us to do anything that will hurt us or cause sorrow, and neither will our biological parents. Well, quite honestly, some parents are pretty crummy in their role, but not the ones I’m thinking of at the moment. I know, just as we all do, some people who are great at following God’s commandments to keep the Sabbath holy and  refrain from killing other people, and yet they totally diss their parents and their instructions to come home on time, do their homework, clean their rooms, and a myriad of other things.

Doesn’t this seem a little paradoxical? It could be that I’m expecting too much from children to truly understand the parallels between the two parental sources, our Heavenly father and our earthly parents. In any case, I’ll leave the explaining part to the grown-ups. For now, I’ll just say that children need to be obedient to their parents and to God.