Is there any greater legacy for a man to leave than that of being a responsible, dedicated, and caring father? At the end of life’s journey, I don’t think money or fame can top it in importance. For a child, there are empty places that only a father can fill. 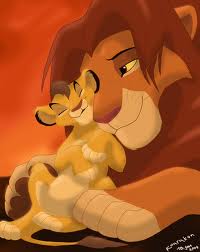 It started with Courageous. Then later that week, I saw a huge billboard with Simba and Mufasa, the words “Be a dad,” written across it. For several moments, I reminisced about The Lion King and its many great themes, one of which is the importance of “remember(ing) who you are.” The movie also said a lot about effective leadership and the power of example. I could go on and on about the attributes of the movie, but I couldn’t do it justice. It’s something you need to see for yourself.

The two movies made me think of other fathers, young and old, living and deceased, and their tremendous potential for influencing their children. Of my young favorites, there’s Rich whom I’ve already mentioned in an earlier post; my son Paul; and Ryan and Charlie, my husband’s son and son-in-law respectively. What all four of these young men have in common is the love and caring that they extend to their children every single day. All work hard and are willing to sacrifice whatever it takes to care for their growing families. Their children look up to them and enjoy spending time with them.

Don’t believe me? Here are a couple of recent examples. My daughter-in-law Amanda says that she and Olivia Jayne will often go out on the balcony to wait for Paul when it’s time for him to come home. As soon as the tiny tot sees her father, she gets excited and starts stomping her feet. Recently, little Allie spent a couple of hours with us one morning before school started, and one of her favorite topics of conversation was Daddy, Daddy, Daddy (a.k.a. Ryan). And then there’s Hannah, Charlie’s oldest child. A sweet and precious child, she has often shown me a pearl necklace that her father gave her one evening when they went to daddy/daughter event.

Fathers of adult children are important too. Regardless of age, children need fathering, especially when it involves showing an interest in their lives and expressing a desire to spend time with them. As a quick example, my daughter Elizabeth enjoys monthly outings with her father. Whether shopping, enjoying a movie, or sharing a meal, his presence in her life clearly says, “I love you.” Then there’s my husband who talks with and sees his children on a regular basis. Last week, he spent one day hog hunting with Ryan and another day visiting with Lauren and her children.

Speaking of older fathers, last week I attended the funeral of an 84-year-old father, step-father, and grandfather. After the demise of his first wife, he married a friend of mine who had four young children, and for over twenty years, he’s been “there” for them. At the funeral, these four young adults sang a beautiful hymn in a tribute to Will.

Is there any greater legacy for a man to leave than that of being a responsible, dedicated, and caring father? At the end of life’s journey, I don’t think money or fame can top it in importance. For a child, there are empty places that only a father can fill. Even someone of presidential stature, Barack Obama, speaks of feeling a “father hunger” for much of his life.

Lest you think that I’m dismissing the importance of mothers, I’m not. It’s just been my experience that if a parent “bails out,” it’s more likely to be the father. Why is that? And what can be done to reverse this social trend?