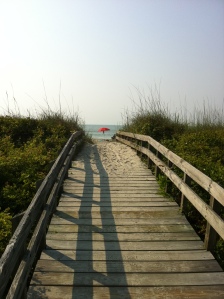 Isn’t that a great picture? It’s included in Eve’s Sisters, a collection of essays applying psychological and spiritual principles to the lives of women in the Bible while comparing them to the women of today. Since the photograph will be black and white in the book, you’ll miss seeing the pretty red umbrella. Still, I love the picture as it seems to beckon the onlooker towards the sand and surf and a great day at the beach.

With only a few weeks until I actually get to see and hold Eve’s Sisters, I’m getting a little anxious, antsy too.  After all, I’m self-publishing this book and have no marketing department behind me. I’ve had no editor giving me direction or advice. Nope, just little ole me and some kind members of my writing group who helped me out in a few areas, especially Mindy. And my sister Ann read the first draft and declared it to be the best thing I’ve ever written. But then, she’s my sister; she might have been trying to make me feel good. Or then again, maybe she was hinting that all my other work had been inferior.

What if no one buys a copy? What if the people who buy one do it solely out of loyalty and support and then they go home and shelve the book, never to be glanced at again? Just as scary, what if they read it and find it lacking in some way? Perhaps it’s too shallow or perhaps not biblically correct? Then again, maybe there’ll be some nitpickers who will delight in any tiny spelling, punctuation, or grammatical errors I might have missed, thus missing the essence of the book and the women it describes.

As an aside, yesterday I sensed that my intro psych class was extraordinarily nervous about their first test so to help allay their tension somewhat, I wrote a short sentence or two in an introductory statement that preceded the online test. I don’t recall the precise wording today, but it went something like, “I know you’ll do well. Just make sure to read ech question and its options carefully before making your selection.” Did it help? I’m not sure. One of the young men was so amused by the misspelled word that my effort at encouragement took a back seat.

Guess I got a little carried away up there. Before posting this, I need to add that I’m publishing this book with Inspiring Voices, a house associated with Guideposts. After having an article published in the April 2011 issue of Guideposts magazine, I did a little research and perceived Inspiring Voices to be reputable publisher. So far, all of my experiences with them have been positive, and the galleys look GOOD because of their internal design team.

Has it been a lot of work? YES. Would I self-publish again? Probably not, but maybe. There are lots of advantages to traveling the self-publishing route. There are quite a few potholes and hurdles and curvy roads too. In the next couple of posts, I’ll examine some of the pros and cons, and in doing so, maybe I’ll give someone  out there the nudge she (or he) needs to “just do it.”