A visit to a church cemetery reveals some unknown family history. 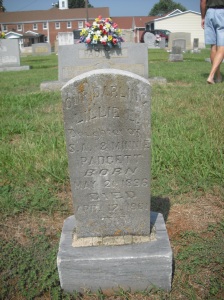 Ever had one of those “aha” moments that both shock you and instruct you at the same time? I had one yesterday. Standing in a cemetery outside of Ellenboro, NC, I learned that my great grandmother had a daughter named Lillie, a child who talked and laughed and ran and played…and of whom I’d never heard.

On our way home from Linville Falls yesterday, we cruised through Forest City, NC, a city that I used to visit often as a child. My paternal grandparents were both from that neck of the woods, and when they’d go to see their siblings and parents, they’d often take me along. Many’s the time I’d sit in the backseat of their pale green ’53 Chevy as my grandfather navigated the two lane roads of that era. There may have been another child along for the ride, but I don’t remember that. I just remember being excited about going to see Aunt Doc, one of my grandmother’s sisters.

As we rode through the downtown area of Forest City yesterday, I remembered one late afternoon 50 or more years ago when we arrived in town around dusk. Streetlights were already on, but since it wasn’t that late in the day, it must have been in the late fall or winter.  As soon as my grandfather cut off the engine, my grandmother jumped out of the car and scooted across the street to Aunt Doc’s shop. She was a seamstress who owned her own business, and even as a child, I had the feeling that she was looked at as the matriarch of the family. She lived to be 99!

Yesterday as we cruised through town, I made a vow to return…and soon. It’s lovely, and much larger than I had imagined. Leaving there, Otis drove on to Ellenboro, a small nearby town where my father and his sister lived when they were children. My great grandfather, Sidney Padgett, was the postmaster there “back in the day,” and naturally I had to go inside to check it out for myself. I asked the woman at the counter for directions to Race Path Baptist Church, and I must have looked utterly confused because one  the other employees  volunteered to walk out to the car and recite the directions to Otis. I haven’t seen that kind of customer service in ages.

As the postal employee was telling Otis to go the third stop sign and bear right, I looked around me and tried to imagine the world as it had been when my father was a child. Across the street from the post office is a train depot that looks much like it probably did then, 75 years ago. It’s been preserved and painted and is probably of historical significance. Even the railroad tracks and rocks on either side were neat and clean. Is that where my grandfather, Sidney’s son, went to work? What kinds of goings-on did my great grandfather see when he glanced across the street? Did they live nearby?

We thanked the obliging employee and continued on our ride to the church. I was excited, yet nervous. My aunt Polly had told me that many of my grandfather’s relatives were buried in the cemetery at Race Path. We pulled around behind the church and got out of the car. Many pictures and scribblings later, we started home. One of the most startling discoveries of the morning was that my great grandparents had had a daughter.

All my life I’d known only of my grandfather and his brother, Woodell and Avery. And yet here was a tombstone that read “Our Darling Lillie E, Daughter of S.A. & Minnie Padgett, Born May 2, 1986, Died April 12, 1901.” It broke my heart to read of this little girl who left this mortal existence so early. Had she died of something that modern medicine could have easily cured? Were her parents devastated? Avery wasn’t born until three years later, and I can’t help but think of how Sidney and Minnie must have missed little Lillie’s presence.

I’ve only seen one picture of my great grandmother Minnie, and she looked sad. I’m not talking about bad hair day sad; I’m talking about deep sadness. Now I can better understand why. I’m told that she had a rough life, and now I know it was one of sorrow too.