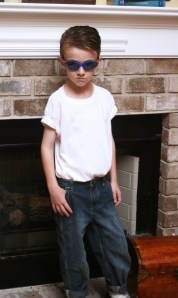 See this little boy? That’s Mr. “Cool Man” dressed for an end-of-the-year school event. He loves ice cream, hamburgers, chicken sandwiches, shrimp, and tacos. And did I mention that he LOVES ice cream? I’ve never seen a child so wild about it, especially vanilla. He also likes to play basketball, to dance, and to read. He also like to make things, and I think maybe one day he’ll be an engineer like his dad. He’s a big help to his mother, and she told me this morning that sometimes he helps the younger children choose their church clothes.

Today is Braden’s 7th birthday, and I’m remembering the day he was born and the events leading up to his arrival. We were in St. Mary’s, GA, and since the doctor had indicated that it might be a while before the baby was born, the three of us who were the “support team” split up for a while. Rich, the baby’s father, went to the cafeteria for a snack, Carrie’s father went to the waiting room to take a nap, and I went to Wal-Mart to buy some flowers for the soon-to-be-mommy.

Upon my arrival back at the hospital an hour later, things had changed drastically. The doctor had administered some Pitocin, and Carrie was in intense labor. In fact, her labor pains had begun in earnest almost as soon as her cheerleading squad left the room. I walked into the room to find her husband and father on the two sides of the bed, both talking to her and trying to soothe her. But where was the doctor??? Where was the anesthetist? Turns out they were both involved in another delivery, a C-section.

Suddenly, the door opened, and in rushed the doctor. He determined that it was too late to administer an epidural, and at that time, Carrie’s dad and I left the room. We stood in the hallway, too anxious to talk or even think straight.  During this time, a woman walked up and asked what was wrong, and when I told her, she hugged me and gently assured me that things would be fine, just fine. I was grateful for her kind gesture and encouraging words, and later I learned that she too was an obstetrician in the hospital.

What seemed like an eternity passed, and then we heard it…the BEST sound we’d heard in a long, long time: the sound of our grandson as he made his arrival in the world. He continued to cry, and then I heard another sound, my daughter’s joyous laughter. After a few more minutes, we were allowed to go into the room, and there he was…a perfect baby boy cradled in his mother’s loving arms.

Happy Birthday, Braden! I sure enjoyed sharing some ice cream with you Friday.